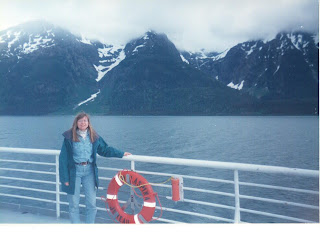 aboard the Malaspina ferry, May 1994
Fifteen years ago on Memorial Day, I arrived at my sister's front door in Eagle River, just up the road from Anchorage. I'd made the journey from Milwaukee, Wisc., to Alaska in just over three weeks with a dog as my companion. At the start of the trip, I drove my truck to Minneapolis while my youngest brother drove a U-Haul carrying all my possessions to a house he had just bought in the city. I told him he could borrow my furniture (and my boxes of books, clothes, dishes... everything) while I was in Alaska. Then I took off.

I camped mostly, learning to set up my new tent proficiently and feeling safe from strangers because of the protection of my dog. We visited places I'd never been: Devil's Tower, the Badlands, Mount Rushmore, Wounded Knee, Yellowstone and the Tetons. Glacier National Park. Southeast Alaska by ferry.

Along the way I met a variety of people, most of whom I expect I'll never meet again: some college students at semester's end, a traveler camping out on his way to a new job, a couple guys camping independently in the Badlands. People camping on the ferry. I didn't meet many other women travelers. I guess there's a reason for that. Before I left on my trip people were worried about me. When I told them I was taking the dog, they seemed a little relieved, but were probably still a bit worried. Yet I couldn't have imagined not taking the journey because I didn't have a human companion. Just days before leaving Milwaukee, I'd been in front of a judge declaring no future claims in case my soon-to-be-former husband won the lottery the next day.

For the previous six months I'd been living in a small apartment in a converted mansion in what some considered the inner-city, but which felt pretty alive and comfortable to me despite my small-town upbringing. Going off on a road-trip on my own felt like the natural thing to do; the only thing to do. It would cleanse me. It would restore me; free me. It was a big leap at a new life that could only happen with a change in location. Once I left, I didn't look back with regret. Not even once.

I remember that as I drove here I'd stop in communities for a day or so, taking my time to stroll around before I headed to the next campsite. I'd take note of places where I'd think, if it doesn't work out in Alaska, I could always move here. That first year was a rough one. Finding a job; eventually moving out of my very understanding sister's rec room into an Anchorage neighborhood.

It took awhile to figure out whether it would work; whether I would fit in here. After a year I met Jon and have continued to meet more and more like-minded people. I remember several years ago, after Jon and I had moved in together. I was headed to Wisconsin to visit my dad while he was having heart surgery. I told Jon I had to go home for a visit, to which he said, "This is home."

And that was when I began to realize that there comes a time when you're no longer a visitor in the community where you decide to live. There comes a time when you become a part of it and you feel connected to the people and the geography and the sky. When you care and you stand up and get involved in issues that are important for the community. That's when you've found the place to call home.

I still go back to visit my family and I love visiting the Lower-48 and other places on trips, but when the jet touches down at the Ted, it's always with great relief that I'm home with the familiar mountains to the east and the moose munching on trees in the neighbor's yard. It's just hard to believe it's been 15 years. 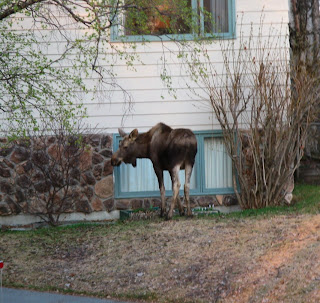 Congratulations on your 15 year Anniversary and still with such a postive attitude about our state. Glad to have you as another like-minded friend in a state filled with so many closed-minded people.

yeah, good for you and finding your place....(and not to mention your venture across the country was commendable!) am headed back later today to AK......see you there!

I agree with you and Jon ... home is where your heart is. If it's back in the lower 48, why would you be here? I have friends who talk about going 'home' and I always want to ask, "what do you call the place where you live 50 weeks of the year?" I'm glad you live in my home.

Awwww -- that was great!