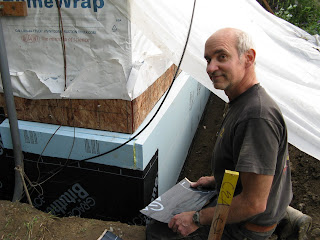 On Labor Day two years ago, Jon and I began our odyssey of home upgrades by tearing the deck off the back of the house. What followed was two months of work that included a garage expansion and some structural repairs. We also added a prow-front to our early '70s split-entry house. (Now more than two people can stand in the entry at one time.) The project involved a new foundation for both additions.

After the initial work was done by the contractors, we had an energy audit and began an 18-month (with gaps here & there) campaign to improve the energy efficiency of the house. Insulated the attic to R-49, replaced the windows and the sliding deck door, added caulking to gaps and installed new bathroom fans. Oh, and we had a new boiler and water heater installed. We came in just under the deadline for an Alaska program that reimburses part of what people spend on energy upgrades based on how much their homes improved. In June, our home was declared "5 Star" by our energy rater. That's pretty darn good.

But before the energy rater left, Jon and I asked if it would be worth it for us to follow through with Jon's plan to excavate and insulate along the outside of the foundation. The entire foundation. The answer was "yes." Since we plan to be here for some time, Jon really wanted to do this project and had been researching for months by talking with experts, visiting a few informative websites (including this one) and making plans. I was not so keen on the idea.

Where Jon sees a challenge he wants to take on, I see an insurmountable project that will take over every part of our daily lives, take us away from doing fun things (like hiking, biking & camping) or going on trips. I really like going on trips. I wasn't always as enthusiastic and encouraging as I could have been, but when it comes to Jon and his ideas about the house, he is usually right.

After a few dedicated days of digging a trench around most of the foundation (with the help of a friend), removing shrubs and a tree we didn't want to remove but had been planted way too close to the house and pressure washing the dirt off the concrete, we were ready for the materials.

There are a few methods for doing this outer wall insulation. Some said to put the sticky vapor barrier against the concrete, then put the foam board against it and back fill. The more we researched and thought about it, the more this didn't make sense. Why leave the foam insulation outside the barrier when we've read that even foam loses some of its insulating value when wet? Jon posed the question on one of the building sites and another person concurred. Now we were set.

On Friday, our friend Kip came over to get us started. First they applied the barrier along the footer, then glued the foam board to the foundation. After that, we added the barrier over the board and up onto the wood sheathing just above the foundation. After Kip left, Jon and I continued into the evening until two sides of the garage were done. By then, we were much more confident working with the tar-like sticky backing of the barrier and we were still getting along.

One of the things that bugs us (Jon especially) is that our general contractor never talked about this method (or any method) of insulating when he was working with us daily on this expansion. When talking with our energy rater about it in June, he commented that most people would rather spend that money on a granite counter top which people can see rather than on something nobody would ever see because it's buried under the back fill. But I know we'll see the difference in the gas bills over the next two decades we expect we'll be in the house. And in case you're wondering: we will be redoing the kitchen. And the counters, I think we'll use laminate.

maybe your heating bills will go down so much that you can work less and have more time for hiking, biking, and traveling later!