A few weeks ago, trail building began on the Kincaid singletrack project. About nine miles of skinny trail will wind through the park on the west side of Anchorage. Not as steep as the STA trails that were built in 2008 on the east side, but the same group is in charge: Singletrack Advocates.

It's been a rainy month but the handwork is coming along. The volunteers go through after the Sweco to cut remaining roots from the tread, then shape the trail so that water will flow off instead of pooling in low spots or eroding a channel on slopes. Did I mention volunteer crews are spending a few hours a night doing this work? 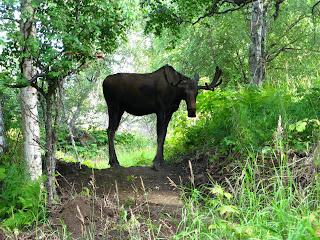 This moose knows the trails aren't ready yet.

Imagine the dismay and utter frustration when one crew last week was working on building a banked turn, only to have a pair of impatient mountain bikers ride by on the unfinished, soft trail. Mind you, at every possible trail entrance are orange fencing and signs announcing the trails are under construction and not open to ride. Imagine how much more incensed our group is that one person has complained, yes complained, on a forum that our trail project is affecting access to the places he's biked for years! You can read my friend Tim's open letter to the guy and others like him here. Tim's good at using the f-bomb; I am not.

That doesn't mean I'm any less ticked at this guy & people like him. But you know, in this world, there are givers and takers. I always hope that I can balance what I gain by helping with building or maintaining the trails and encouraging my friends to do the same. When I go out on the new trails when they open, I want to go out knowing I helped, not thinking that I cut a rut in new trail that another crew had to then fix.

But there will always be takers who think it's only about them. Fortunately, in this project, they are outnumbered.