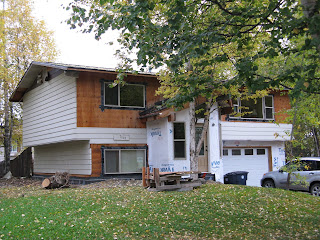 Mid-way through the exterior project.
Imagine: moss green with cedar trim.
Where has the time gone? The birch leaves are a brilliant golden-yellow on this gray day. The rain yesterday left enough dusting of snow on the front range peaks for me to want to wrap another layer around my shoulders even though I'm sitting in my living room. Fall is here ahead of the calendar, as is typical in Anchorage. Because fall is catching-up season in Alaska, I'll give updates on previous posts.

People have asked about the beach biking trip I had planned with Jon and a few friends. That fell through the day before we were to leave when our support driver had a work emergency. Jon and I both felt a huge weight slip from our shoulders because we'd been working until dark the previous days trying to finish insulating the foundation so we could have the perimeter of the house backfilled before we left. Though I was momentarily disappointed, never have I been so relieved to cancel a trip. The timing was all wrong. As it turned out, a storm blew in from the Gulf of Alaska and our friends in Homer (the destination town) said the weather was cold and wet that week. We could do the ride another time, and maybe under better conditions. 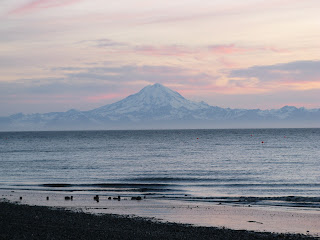 Mount Redoubt. Instead of biking here... 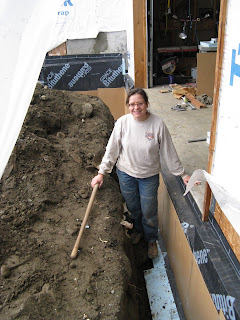 I was insulating and backfilling here.
Since Jon had the next five days off, we were able to finish the backfilling and move on to the above-ground walls. We've been researching siding and trim, trying to figure out which materials look best and will last longest with minimal maintenance. It took a few weeks, but I think we've decided on the siding. The challenge is getting it in from the distributor in time to get it onto the house before the snow flies, which was my goal. (Yes, I'm good at setting goals for Jon, but I will have jobs in the project - I love painting, so I'm in charge of trim.)

So, here we are, three weeks into September. Leaves falling. Chill in the air. I'm looking forward to seeing what this place will look like all decked out in siding and with snow in the yard. Jon said the color scheme we've picked (with him giving me the final word) reminds him of a cabin in the woods. That's what I'm going for. Sounds inviting. I'll show you when it's done.

Lest you think I've had no bike rides, I have biked on the new trails being built in Kincaid Park and even managed to enjoy an afternoon of mountain biking with some friends on the Matanuska Lakes/Crevasse-Moraine trails. Beautiful fall rides! I need more of that.
Posted by bikegirl at 2:41 PM

Nice houses you have out there, is there a nice view?,
i was looking forward to reading your beach trip report but looks like your busy!, maybe next time!