Take me to your cheese!
part 4
We delay the inevitable, slow our pace as we grow near what we don't want to face. Each visit, I wonder if it will be the last with both my parents greeting me. I prepare mentally for that which we can never be completely prepared. I'm going there to help; to get an idea of what they need; to assuage my guilt at not being there for the day-to-day. Deep down I know I can handle lots of things, but I have a tough time handling their situation. When it comes to people's problems, I'm more of a triage sort-of gal. Even better, comic relief, because when we stop laughing, all that's left is the seriousness...

June 5
Let's see, where did I leave off? Right. I had drifted off to sleep in a quiet motel room in Reedsburg after attempting to put a few words on paper... I woke from a sound night's sleep, packed, snacked and was out of the motel before 8 a.m., even before the free coffee was ready to be served, coasting toward the trail before the tourists or anyone else at the motel had apparently stirred. Saturday morning and I was almost the first one to the trail. The first to get there were a group of Boy Scouts from Baraboo, working on their camping and biking badges.

I headed off, leaving Reedsburg and Friday's hilly roads behind, pedaling easily along the 400 Trail's crushed-limestone path, surrounded by bird songs and sky. Much of the way, the trail would follow the Baraboo River as it meandered under bridge after bridge for the next 22 miles to Elroy. Three of the older scouts began riding near me, well ahead of the group. When I stopped to take a picture of a sandhill crane, they kept going. I guess it's a lot like seeing moose in Anchorage; after a while they are part of the scenery and rarely worth stopping to photograph. Or, maybe it's just that they were teenage boys.

The scouts were going only as far as LaValle. I chatted with them when they stopped to wait for the rest of the group. How much does that weigh? I don't know. You can lift it. The guess was 80 pounds. That sounds a little high to me but I never took the time to weigh it. Better that way, I think. I passed through LaValle, continuing toward Wonewoc where I saw two more cranes next to the trail.

I slowed to a stop, hoping my brakes wouldn't squawk as they had earlier in the trip. One adult left the trail while the other remained. Then a chick (I hear they're also called colts) stepped from the tall grass and joined its parent on the trail. They walked to an intersection with a driveway, then stood quietly in the grass as I rolled by. 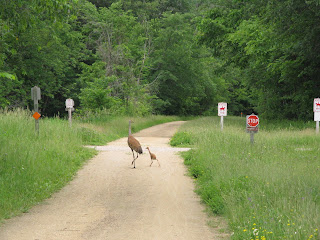 Cranes on a morning stroll.
A couple weeks earlier I'd seen a pair of cranes near a trail in a park in Anchorage. It was the first time I'd been so close to them. My friends and I watched quietly as the pair of birds ate in a bog. These cranes, thousands of miles away were almost as oblivious of my presence as they made their way down the trail. I felt lucky to see and hear the cranes, to join them on their early morning browsing. I don't remember them being around when I was a kid growing up in the area, but their population has been rebounding with the increase in habitat where they can thrive.

I continued toward Wonewoc, and along the way met another fully-loaded cyclist. He had biked from north-central Illinois and had turned back toward home after spending the night camping in Wonewoc. He filled me in on how raccoons dug up the turtle eggs that were buried in the trail bed and on the local stories about cougars. How could I not joke about being in my 40s, as were, he said, the women in the bar the night before who were telling him about the recent sightings and livestock attacks? That'll make a guy nervous about going back to his tent! We each rode away in our respective directions and soon I was rolling into Wonewoc where Pam (yes, the Pam who was in Madison earlier) greeted me from her front yard. 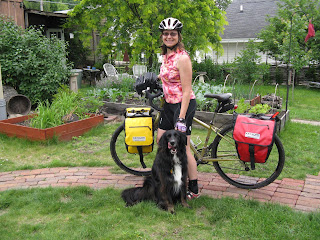 With the talented Britta in Mike & Pam's back yard - look at those veggies!
(A little out of sequence - this was just before I packed the bike for the plane.)

Pam made me an iced coffee and we hung around in the back yard watching turkey vultures flying in loops overhead while Mike worked on getting a car to start so he could sell it. Britta jumped over her agility hurdle while I checked e-mail, called my parents and called Jon in Anchorage. I bided my time.
Soon, it was time for lunch: I shared my crackers & cheese, while Mike added bread, more cheese, apples & salami to the plate. We moved to the shade of the front porch and I listened to their updates on Mom & Dad; some of the challenges Mike had dealt with. Because he lives relatively close to them and is self-employed as a carpenter (tough, with the economy) and a writer, he is often the one called when they need help. Taking a job renovating the house where we'd stayed in Madison had given him an excuse to take a breather from the stress. Yet, Pam advised, "You're not here to solve anything; you're here to visit." Good advice that I would listen to most of the time.

Pam decided to bike to Elroy with me and I was happy to have company for the rest of the ride. Again, following the river, past fields and wetlands, through the tiny cross-roads town of Union Center. We just barely reached Elroy when we left the trail and crossed the river again to enter an old trail that long ago was a road and still had a few bricks angling up through the tall grass. Onto the highway and to the front door. I could have been there sooner, but admit I wanted to ease my re-entry. 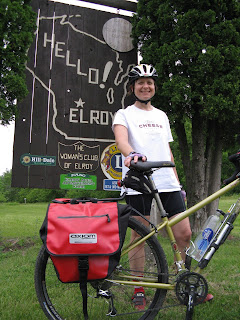 And what did they say when I told them I'd biked from Chicago? Dad, was characteristically silent. Mom was excited to see me and especially surprised that I'd biked. But she swore that had I told her I'd be cycling from Chicago she would not have worried one bit because she knows that I know what I'm doing. She was so practical in her statement, but I knew she would have been worried sick.

Not even a half-hour after Pam & I arrived, the skies began to pour rain. Huge drops bounced off the deck as we sat inside.

I had a week for my visit. A week of rain showers and visits with relatives; high school graduations and get-togethers with school friends & teachers; strawberry picking and cheese shopping. Observing Mom & Dad in their habitat and offering little suggestions and help; riding my bike into town and with my niece & nephew; catching up on the local news.

I didn't solve anything. Dad's refusal to move into an assisted-living apartment that would be so much better for both him and Mom might eventually lead to a catastrophe. That won't be my fault or anyone else's fault in my family. His mind is sound and he pointed out that it would take a lawyer to force him to move. Maybe at this stage he's just being stubborn to be stubborn. But it's not helping him and it's not helping Mom...

As Mike told the parents earlier this year: If you don't let us help you, people will think you have lousy kids. We're not lousy kids; we're just at loggerheads. And when I watched Dad's face as we talked about it, he seemed to be enjoying the battle. Damn it! Maybe he's just toying with us to prove that nine adult children are still no match for an old WWII veteran.
Posted by bikegirl at 1:31 PM

thanks for posting....I finally finished your last part of the story. And you made it! A nice way to enter the summer.