what I know about myself

The goal: to make it to Madison, Wisconsin, on my second day of bicycling from Chicago to my hometown of Elroy. My brother and sister-in-law would host me at their East-side apartment. I didn't want to think about the total miles, but subconsciously broke down the day into units that measured the distance from one small town to the next. It turned into more than 91 miles, detours included.

June 3
Though I'd been very hungry the night before, the pasta entree was enormous and I managed to eat only about a third of the meal, so in the morning I had enough leftovers to sustain me with carbs and protein for my ride that day. Once again, I missed my watch alarm (maybe it doesn't work) and the hotel alarm clock must not have gone off either. I watched the weather channel for the forecast, then got a bagel near the front desk, finally rolling out at around 9 a.m., a tad behind my imagined check-out time.

In search of the elusive Wisconsin bike routes maps, I stopped at the village hall in Genoa City where a group of elders was enjoying coffee and coffee cake. They directed me to the clerk who didn't have the maps but assured me that county highway H was the way to go. "H it is!" I proclaimed to the Council of Elders. Where are you going? Elroy. By yourself? Yes. She may be good lookin' but she doesn't seem too bright! Hahaha! (Thanks for the compli... wait a second!) And off I went. This is why I didn't tell my parents I was biking: Mom would have run out of Hail Marys before I'd left Cook County.

Highway H is the back road to the resort town, Lake Geneva. I stopped for a wedge of cheese, then headed to the visitor center, where they had no bike route maps and I wondered who would stock these maps I'd read about online. I made my way from the lake shore out of the busy town, continuing on H to Elkhorn where the distinctive hiss of leaking air brought me to a stop. In a grassy strip next to a sidewalk, I detached the panniers and removed the rear wheel, replacing the tube, all the while being watched from across the street by someone in a house who appeared to be painting around a window. I waved and they kept painting. Continuing down the street, I stopped seeing Hwy H signs and pulled in at a local business where a young man brought up Google maps and showed me where I'd missed my turn, on Church Street. Must have been looking at the church instead of the signs. Oops.

By then, I was getting hungry thinking about the sausage & pasta slowly warming in my pannier. At a crossroads in the unincorporated town of Tibbets, I leaned my bike against a stone wall of a cemetery and took a seat on the grass to eat my meal. (I would have ate at the picnic table across the street but it was in the sun and I would have enough sun that day.) Cars passed, a farmer mowed a field nearby. I tried not to think about ticks. About five miles up the road, in La Grange, I came across my favorite bike shop of the trip. It was also a cafe and from the aroma coming from the kitchen, I wished I had been hungry! One of the owners, Mike, gave me a tip on an easy-to-miss turn in the next town and I managed to buy a few things - including another tube - before heading out again.

Now, I was pedaling north through the rolling, wooded hills of the Southern Kettle Moraine Forest, an area popular with skiers, hikers and cyclists. In almost no time I was in the town of Sullivan, where I would ride the Glacial-Drumlin rail trail for the next 33 miles to just a few miles outside of Madison. After buying my state trail pass at a small market, I was heading west on a path made of finely-crushed gravel, in the shade of trees that lined the trail. 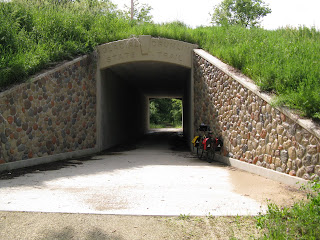 A fawn stepped out of the brush and onto the trail in front of me. It paused, looked at me as I slowed almost to a stop telling it to go back to its mother. It began running down the trail, back legs kicking awkwardly up with little control before it jumped back into the woods. Dark-colored butterflies resting on the trail flew up just before my wheel rolled by. Some would fly alongside or in front of me, leading me down the trail. Red-winged blackbirds, goldfinches, meadowlarks; their songs and others surrounded me as they perched on cattails in wetlands or fence posts next to fields; flew about over the trail. Chipmunks snacking alongside the trail scurried back into the brush before I rolled past.

Before arriving in each town, I would see the water tower looming above it, as I had the day before in Illinois. Along the rail-trail, towns still had their old depots, now converted to cater to cyclists with restrooms open after hours and decks with tables and chairs. A few snacks and water-bottle refills later and I was in Cottage Grove, where the trail ended and I had to pull out my map to figure my way into Madison. Would the road be busy? Would it have a shoulder? A path? I rode to the intersection. There was a bike lane in the street and very light traffic, so I steered into the left turn lane and made my turn into the west-bound bike lane. Soon that disappeared and with the dim evening light, I got onto a path (or was it a sidewalk). As I neared Madison and wondered at my need to go back and forth between bike lane and sidewalk, there appeared on the pavement the distinct white lines and lettering. This bike lane would take me into the city, Madison, one of the most bike- and pedestrian-friendly cities in the country.

A smile widened on my face as I coasted down a hill into the city. I saw a trail to the right but continued. Then, stopped by a red light, I watched a group of a dozen female road bikers cross the road in front of me. I thought for a moment, then turned to follow them. Does this trail go to Olbrich Park? Yes, that's where we're going. I'm going to follow you. Soon, I was at the park, but needed to be in a different part of the park, by the gardens to find the apartment, I would soon learn. I wandered up the street and onto a side street which led to the house and their upstairs apartment, overlooking the trail near the gardens. Britta, Pam & Mike's dog, announced my arrival.

I could have made it sooner, had I not had the flat, made the wrong turn or had the need to chat with people along the way. But that's the difference between driving the interstate and cycling the byways. This was exactly what I had in mind. "Here, I brought you cheese."

An IPA, a shower, a stroll to a pizza joint and a night on the Therm-a-rest after a long day. Somewhere in there was a recipe for a hangover.
Posted by bikegirl at 5:30 PM

I can't wait to read the next installment! I hope you're planning on doing a slide show about your trip when it's cold and we're all dreaming about biking adventures.