other people's fears - the journey begins 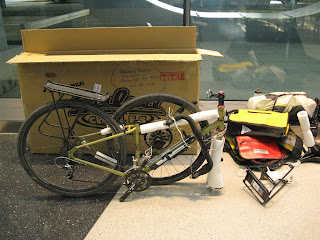 People didn't ask me why, though I may have answered with the question: "why not?" If they didn't get it, they would ask if I was afraid or nervous. Tell me there are weirdos out there. Maybe I'm the weirdo, though I didn't pose that option.

June 1:
I arrived at Chicago's O'Hare Airport, collected my bike box from the oversized baggage claim and set up next to a window that looked out at the cars and people coming and going from the busy airport. A group of musicians was nearby, checking their emails, and, I would later learn, waiting for their flight back home. I went to work reattaching the front wheel, handlebar, pedals, front rack, handlebar bag. When I finished, I thew my hands up and yelled, "Done!" while one of them watched. I suppose it's unusual for a lone cyclist to unpack and assemble her bicycle in one of the nation's busiest airports.

We chatted and at first I couldn't make out what he was saying over the noise of the terminal and his accent. Oh, from Dublin! What kind of music do you play? Irish. Punk Irish or Traditional? Traditional. The other two joined in, told me of their tour in Wisconsin and Chicago. We're going to Alaska in September. They offered me a CD. Not sure if you want to carry more weight... I thanked them and took the CD, read their names. No way to listen to it for a few days, but I would. Then, they were gone. Heading through security, back to Dublin and other gigs. They wished me well and I already knew that the trip would be great, though there in baggage claim, I didn't know just how many people would ease my journey, provide advice or a laugh. How many would offer concern or kindness, how many I might possibly inspire to climb onto their bicycles and start a journey, even if it is merely to cross town. 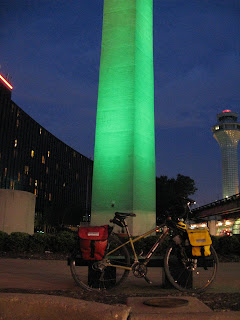 Evening at O'Hare, behind the Hilton.
That first night, I planned to sleep in the airport bus terminal near the hotel. It was busy, well-lit and inhabited by a few small sparrows that perched in the rafters and drank from the water fountain, which, I was reminded, is called a "bubbler" by Wisconsinites. I napped on a sofa, facing an outdoor window. When I headed to the restroom, I wheeled the bike, intending to park it in the handicapped stall since nothing can be left anywhere. That's when I met the women on the night cleaning crew: Geneva and Sandra.

Where are you going with that bike? Wisconsin. They assumed I would take it on the bus, I suppose since I was hanging out in the bus station. You're riding to Wisconsin?! Yes, I was grinning. Are you married? Yes. Does your husband know what you're doing? I laughed and Geneva told me it wasn't funny, reminding me that the weirdos were out there. I hope I don't hear about you. I understood. Women aren't supposed to travel alone. We shouldn't talk to strangers and we shouldn't be out after dark or trust anyone. Damn! That's a lot of stuff I'm not supposed to do.

Later, Geneva brought me a pillow made of a trash bag filled with rags, covered with a couple clean rags. She pointed to a prime sleeping spot and handed me the pillow and a cardboard box. Get that spot before someone else does (someone else being one of her least-favorite panhandlers). A television blared newscasts which continued to cover details of the oil spill in the Gulf of Mexico. I slept and woke; slept and woke, eventually moving to a quieter, yet maybe "less safe" spot on the sofa where I slept through my alarm, assuming it went off at all.

Five a.m. Pouring rain initially made me regret not leaving O'Hare the previous evening. I returned the pillow, changed, ate a snack, pulled on my rain jacket and said goodbye, then took a train to the outermost parking lot, climbed on my bike and pedaled away. The first big splash from a truck was the only one that mattered and I figured I'd be wet all day.

A few wrong turns and a mile or so of pushing through unmowed grass on the side of a busy road later and I was on my way to a forest preserve where I could ride a meandering trail to get to the road I would follow to the first rail trail of the journey. Deer looked at me from the side of the trail, frozen in place, watching as I checked a map. I saw three over the course of just a few miles. At trail's end, I asked some locals, if you were to bike and had to choose between taking Algonquin or Higgins road, which would it be? Higgins was the unanimous answer. Even though I'd searched online maps and had a street map, I couldn't tell which route would be better until I was on it. Higgins turned out to have a full-sized break-down lane that was perfect and I made good time before stopping for a few provisions. The rain had ended and I needed sunblock, a big water bottle and some breakfast. By now, I was in South Barrington where the stores appeared to be somewhat fancy.

The people at the CVS didn't mind that I brought my bike into the store (since there was no bike rack). One of the clerks lived right next to the trail on which I'd be riding later in the day. My dad rides it all the time; it's great. Now that I was almost in rural Illinois, what I was doing didn't sound so strange to people. They knew where I was headed; it was as though the lack of mystery meant there was nothing for me to fear. 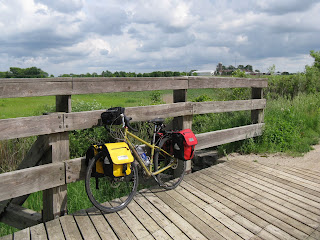 Northbound on the Prairie Trail.
Soon, I was in East Dundee, at the Des Plaines River Trail, stopping at the first bike shop of the trip: The Bicycle Garage. The owner gave me details of a section I would want to avoid: with all the rain, this part will be very slimy and it's curvy. I agreed that this wasn't a good combination, especially for the first day with a fully-loaded bicycle.

On the Des Plaines River Trail and the Prairie Trail (which begins in Algonquin and goes to the Wisconsin border), I rode through parks and woodlands, alongside marshes and industrial areas. Crossed residential streets in quiet neighborhoods in one small town after another. Sometimes the route was on street-side paths. Plus the street detour. 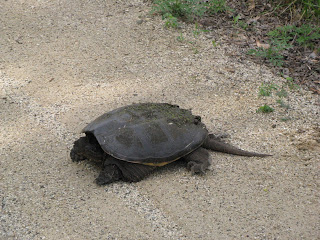 The sun was out and the dispersing rain clouds pushed across the sky. Birds sang in trees and brush all around. A turtle on the trail appeared to be protecting the eggs she had laid in the trail bed (I don't know why they lay eggs on the trails). By 5 p.m., I'd made it to Richmond where I began to feel the effects of the heat and maybe not enough food; maybe not enough hydration. In a liquor store/market, the owner, though initially annoyed that I insisted on bringing my bike inside, recommended a hotel down the road. I'd wanted to push through to the border, but had heard there weren't many hotels just up the road and didn't want to overdo it and end up with no place to stay. Sixty miles was enough, and I'd seen a restaurant I wanted to go to for dinner.

After a recovery drink, shower and a nap, I was ready for dinner. I decided to walk.
Posted by bikegirl at 9:15 AM

Rockin' start to an incredible journey! Thanks for posting the beginning and letting me follow along on this amazing trip.

wow.....sounded like a very sane thing to do and you were really cool throughout all the transitions. Good for you Rose...will continue on reading after you post. A good story! Katherine