part 3
Songs and thoughts fill my head. I think about cars and oil spills. There's a photo op I missed in Chicago. I think about my parents and I think about biking with Jon. I hear the Talking Heads on hill climbs and Amy Correia's Life is Beautiful on ridges and smooth trails. I try to sing but don't have the breath or remember all the words. Once out of the city, the countryside fills me with both peace and energy. I'm just one person.

It was a slow start on the third morning. During the night I listened as trains blew their whistles and thunder rolled over the sound of rain on the roof and the back porch. I pulled the sleeping bag over me. The dog, Britta, visited me once in the night; just checking, I guess. Helping Mike & Pam finish that pitcher of beer maybe wasn't the best way to rehydrate. When I got up, it was still raining and I was pretty hungry so we went to Lazy Jane's where the smell of bacon hit me as we opened the door. Bacon & eggs, it had to be! And some excellent coffee. Despite my appetite, I couldn't finish my meal. (This was an odd phenomenon of the trip: I had a hard time eating enough at meals, relying on energy gels and regular snacking as I went along. It continued even at my parents' house.) We checked out a bike shop for the elusive maps. I didn't really need them; I was just curious to see them. Still nothing.

Back at the apartment, the rain had stopped and I packed my panniers. We hauled bike and bags down the precarious stairway where a faded "No Diving" sign was posted. Mike would escort me through Madison so I wouldn't have to figure the route through trails and city streets on my own. First, I wanted a photo - one I had envisioned two days earlier in Chicago - and I needed someone to take it. Onlookers smiled as I posed, nodding approval. I wanted the picture mostly for my friend Tim to post on his site, but it's also how I was feeling. Is this why I'm cycling instead of driving? Maybe a little bit. Still... 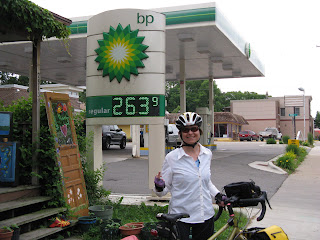 I don't think I'm alone.
We rode trails through the backs of neighborhoods, headed to the Capitol Square where my finger aimed itself at a Hummer limo. (I don't get how these things are even legal!) Once we turned onto State Street - a street that's only open to pedestrians, bikes, buses and service vehicles - heading for the UW campus, I put the limo out of my mind as we coasted down the middle of the street. We made our way past the Memorial Union, where I enjoyed many-a-beer and avoided studying during my first year of college, onto the bike paths that skirt above the shore of Lake Mendota. I could live here, I thought to myself. But finding a job in a place graduates refuse to leave makes for a tough market, according to Pam. Besides, at this stage in my life, this wasn't home; this was a journey.

The day was windy as storms left the area. We arrived at Highway 12, which has a path running alongside it for about 10 miles or so. Was it then that I checked my watch and saw it read 12:30? A very late start, indeed. I didn't see many other people on the trail, but one road biker did pass me. The wind switched directions, from tail wind to side wind. I noticed I was leaning my bike into it, if only slightly. Yes, to the left. I saw a sign for fresh strawberries. I contemplated them, knowing they'd be hard to carry, then saw up ahead that the roadie had stopped. You're thinking about those strawberries, I said as I eased to a stop. Yes I am. You should get some. I had plans to stop at the cheese store in Sauk City for lunch. I don't know if he stopped for berries, but he should have. I should have. I would think of sweet, fresh-picked strawberries throughout the day.

I crossed the Wisconsin River into Sauk City and remembered years ago, the year before I moved to Alaska; a canoe trip. It was a weekend trip with friends: Karen, Janet & Brian. We canoed that day, then stayed in a campground along the river. That evening, I lay on the bank of the river watching a meteor shower, wondering where my life was heading. I'd skipped my 10-year class reunion for this camping trip. I didn't want to see people I'd grown up with; my life was a mess. In the middle of the night, storms rolled in, tents collapsed into puddles and we all climbed into Brian's VW bus to wait it out. The tension between Janet & Brian as she stressed over his friendship with Karen sucked the air out of the van. I was already a thousand miles away. I knew I was leaving...

I made my way to the Carr Valley Cheese store and suggested they should make sandwiches. They looked at me as though the thought had never occurred to them. Maybe it hadn't. One woman showed me where they teach cooking classes and said if she'd had any bread she would have made me a sandwich. And I believed her. I tasted some cheese then selected a small wedge of Casa Bolo Mellage and a box of crackers. The second woman removed the rind and sliced the cheese, placing it in a ziploc. Now I'd have snacks in my handlebar bag to get me through the afternoon, though I did wish for the strawberries and a big chunk of bread.

The next leg after I left town would be all back-roads through the hilly country between Sauk City and Reedsburg, where the next section of rail-trail would begin. Winding roads, turning left here, right here, sometimes a missing road sign. Had I checked the topo map, I would not have been surprised at the hill on Denzer Road that kept climbing and climbing. As I slowly made my way up the hill, worms appeared on the pavement in front of me. I turned my front wheel quickly to miss them. I heard strange noises in the forest, clicking, dripping. I stopped to rest and snack, then noticed worms descending on threads from the trees to the road. Were they aiming for me? I couldn't tell, but it was a creepy feeling of being invaded by some kind of prehistoric two-inch-long worms. Of course, I was the one trekking into their territory.

At the top of the hill, I arrived at an intersection with no sign. The road to the left was gravel and based on my map, it was the place to turn. Road name: Ruff Road. Very fitting. It was the correct route, but two intersections later, I made a premature left turn, for lack of seeing a sign (and not stopping soon enough to verify). When I learned my mistake, I'd gone almost two miles on what felt like very steep hills, though they were less steep on the return trip. Once back on what I thought was the correct route, I was about to pass a house where a man was driving his riding lawn mower. I signaled to him that I had a question and asked if I was heading the right direction to hit Highway W and Rock Elm Road. Yes, I was heading the right way, turn left just ahead.

It's beautiful country back here, I commented. Where are you headed? Reedsburg, but eventually Elroy to visit my family. I graduated from Elroy*. Really? Who are you and what year?
Eric Lease, 82. Rose Austin 83. You graduated with my brother, Chris. I don't remember, I said. It's been a long time. We didn't really know each other but Eric was in the class after my brother John. They were in choir together and he remembered some wild times. He recalled that John had died - that was during my first semester of college. It is a wonder any of us survived, I said, to which he nodded in agreement. After I pedaled off, I was glad that Eric had mentioned my brother, because if nothing else, don't we all wish to be remembered and to know that someone we were close to is remembered fondly by friends, even 27 years later? As I thought of this, the Amy Correia song entered my head yet again. La la la! Yes, life is beautiful.

My route was easy to follow, along miles of ridges, along fields and pastures, forests and farms. There was little traffic and I felt free on the quiet roads. Near sunset, I still had no view of a water tower to signal that I was near the town. Then, I turned onto S. Dewey Avenue and just like that, was heading into town. Another absent sign caused me to miss the turn toward the trail. Although I wasn't getting on the 400 Trail that evening, I figured I'd find the starting point for the morning. That's when a man pedaling a late 1960s Schwinn Continental, riding the opposite direction waved and I waved then asked if I had just passed Railroad Street.

And so an out-of-work architect (things are still rough in the small towns) named Stefan whose sideburns and hairstyle were reminiscent of the style worn by men on high wheels in the early days of cycling showed me around a small part of Reedsburg and talked about years-ago camping trips he took with his high school buddies, riding the same Continental he was riding that evening. I thanked him and wished him well, then headed off to find a hotel room and some dinner before the evening got much darker.

Tucked away from the main road under shady trees, the Motel Reedsburg may have had a worn-out feel (okay, and the tub wasn't spotless), but the cinder-block construction made my room nearly soundproof. The Mexican restaurant across the street made a delicious chili verde with enough leftovers to wrap into the tortillas for breakfast. Though the day was shorter in distance, at 64.8 miles including detours, the hills and wind made it a more challenging ride. Not much farther to go, with the rest of the route on the rail trail. Next up: re-entry.

*For the record, the school is called Royall HS and brought together students from three towns. My graduating class had 100 students, including foreign exchange students.
Posted by bikegirl at 5:50 PM