This evening after the shop closed, Jon packed my bike for the trip, saving me a little time since he's probably packed thousands of other bikes before they've been jetted off on adventures with their owners. I've been making decisions: what to pack - what to not pack; which routes to take - knowing that at any moment on the trip I may want or need to detour. That's one of the fun parts: the unknown. It's also what makes me get a little nervous because I know I don't have the route figured out with certainty. Like anyone else does?

Traveling on my own, I won't have Jon to consult; to say: which route looks better? Or, what makes the most sense to you? Sometimes, I just want a little confirmation that I'm on course. Whether it's a trail marker telling me that I'm at the top of a pass or a street sign telling me I'm on the bike route, having a partner along can be reassuring. Of course, it both people are hungry and it's late in the day, a partner who is equally indecisive at an intersection can be frustrating. "Where do you think we should go?" "I don't know. Where do YOU think we should go?" *Sigh* 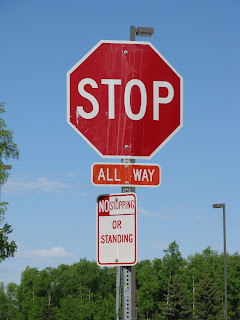 No matter how much you plan, there comes a moment where the planning stops and you just have to send yourself out into the big old world. I fly out early in the morning and arrive in Chicago in the late afternoon. I'll reassemble my bike, repack my gear and await the Wednesday sunrise. I hope for positive experiences with the people I meet. I hope for not-too-hot days. I hope for a gentle tail wind and clear paths. I hope I don't get waylaid by the thunderstorms that are forecast, but will pack my rain jacket just in case.
Posted by bikegirl at 11:04 PM

I hope you have a wonderful and safe ride! It sounds like a great adventure.

I'm so excited for you! I can relate to your comments about folks being worried about a woman travelling "alone"and it makes it that much more satisfying to plan and overcome all the eventualities. Good luck, havefun, can't wait to read your posts!

Way to go Rose! How exciting an adventure (and on your own!) - am impressed.........take care and happy pedaling.

go, go, go! i can't wait to hear about your adventure. must be hard to pedal all that cheese up those Wisconsin hills!

On Saturday I arrived at my parent's front door, much to their surprise, without a car. (241 miles, including a few wrong turns)

I'm so happy I did this trip on the bicycle. It'll take a while to describe all I felt, saw, heard and thought... so far.

Despite what we're often told, the world is filled with kindness. My advice: don't let other people's fears stop you from chasing wild-hair ideas.

Thanks for your kind words & encouragement. Tailwinds!