ninjas of the burnt forest

Summer, 2008 is remembered in Anchorage as a cool, wet summer. It was the summer of high gasoline prices (always good for the bike biz) and it was the summer of a small urban forest fire just off a local greenbelt trail. For people who pick spring mushrooms, namely, morels, an old burn is one of the places to search.

Last Thursday evening, after an early dinner, Jon and I pulled on our muck boots and our backpacks to see if we could find some of these culinary gems. We parked at a small trailhead at the end of a street and started walking down the paved path, peering into the trees as cyclists and runners passed by, enjoying the evening sunshine. A few well-worn paths disappeared into the trees. This is an area of homeless tent camps and who knows what kind of adolescent mischief. After only a few minutes in the living forest, we entered an area of burned trees and charcoal-colored ground. Remnants of tents, empty bottles and other miscellaneous trash was in the area. 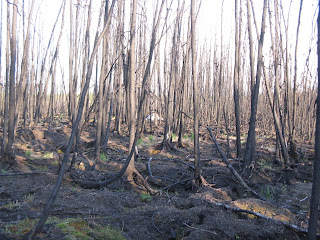 the foraging grounds
We wound between the trees, then toward an open area in the sun. A wooden bridge was just ahead, part of a winter trail. Jon and I sat together on the bridge, our legs dangling toward the creek as we watched the water flow, fluttering the moss on a boulder just below us; we listened for birds overhead over the noise from traffic on some of the major streets of the city and children's voices in a park. If I lived near here as a kid, I told Jon, I'd be down at the creek every day. Growing up, my parents had 10 acres of land and my aunt & uncle owned adjoining land. Almost nothing felt off-limits. My two younger brothers, my two cousins and I spent many days at the creeks (which we pronounced crick) that bordered our property, sometimes damming them to make ponds in which to wade or float toys, sometimes digging clay from near a spring to make crude bowls. We spent our summers outdoors.

From the bridge, Jon and I contemplated whether we should keep hunting. Let's try the other side of the bridge, I suggested. We decided to check the area that was more in the shade, near the border of the burned and unburned areas. The ground crunched under our boots as ash puffed up from the burnt tussocks. False morels appeared. Then, Jon spotted a morel. It was very small; maybe the size of one of my thumb joints. Then I spotted one. We moved slowly, deliberately, through the burn. One moment we would see only the black ground, the next, the honeycombed pattern of the morel's cap would show itself. Sometimes, in a blink, it would disappear and we'd have to find it again. 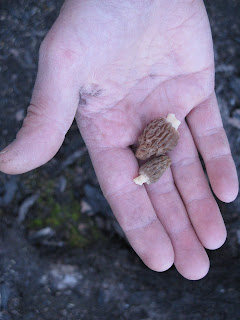 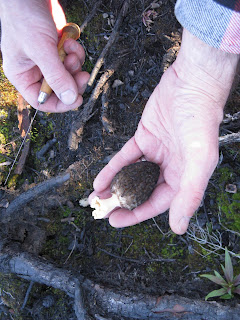 I spotted this monster!
The ninja-like qualities of the morels was described in a guidebook we have:
"I spotted my first morel in Alaska near the trunk of a cottonwood tree because the morel suddenly 'moved.' That is, my eye caught it before it could blend back into its surroundings.... I looked away and looked back. It was gone!" - from Alaska's Mushrooms, by Harriette Parker.

What I loved about our little outing was that I found my "mushroom eyes" very quickly. After we spotted the first one, I knew where I would find more. My eyes were open to recognize the form and color (or lack of color) of the mushroom. I felt the reward each time I reached my knife to cut a morel from the ground. I think I've found my mushroom. 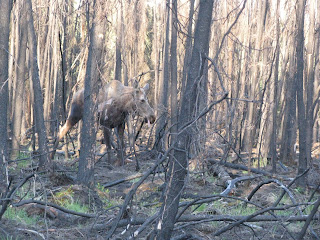 This battered moose was stalking me... maybe it wanted
to sign a photo release. Maybe they eat morels?
Next day, Jon sauteed a handful of the morels and put them in an omelette. Their subtle flavor was almost overwhelmed by the butter that filled the irregular pattern in the caps, but the texture of the fresh mushrooms and the knowledge that I'd helped find them were part of what I savored. I think we'll have to go on another little excursion soon... 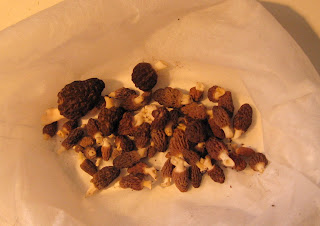 many tiny morels and one monster...
Posted by bikegirl at 9:14 AM

Email ThisBlogThis!Share to TwitterShare to FacebookShare to Pinterest
Labels: morels

I never knew that about morels, how interesting. I love them and would love to live where they grow in the wild.