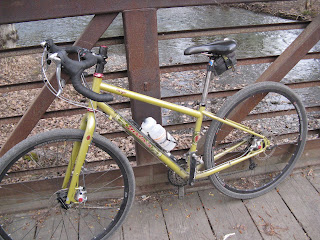 My Salsa Fargo, on the commute. Our lead shop tech has
already tagged it with an "I'm a Fargonaut" label.
Our friend Pete is in the process of cycling from Anchorage to Portland for a summer job. What a way to travel! Whenever I hear people talking about their plans to go on a trip by bicycle, I get excited and a little envious. So when it was time to book the trip to visit my parents in central Wisconsin, I gave myself two weeks. I don't have time to bike all the way to Wisconsin, but I can bike from O'Hare airport in Chicago to their home in the small town of Elroy.

Over the course of the last week, I've done some research, even got information from someone with the City of Chicago about the facilities at the airport. (Thanks, Rich!) He's been very helpful, sending me links to different trail maps and even letting me know where I can drop off my bike box for recycling before I leave the airport. Rather than find a nearby shop that's open late or wait for a shop to open the morning after I arrive, I hope to reassemble the bike at the airport then hit the road. And trail.

The more I research, the more comfortable I am with my route choices. I've been checking out Google Map's beta version of biking directions online. It links quieter streets with streetside paths, wide-shouldered roads and recreational trails. I've been cross-referencing with street maps and with the trail maps I'm finding online. 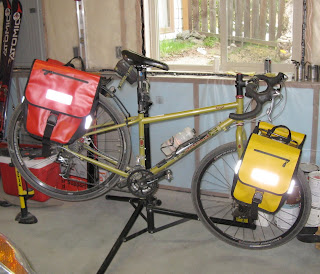 Racks & panniers installed. (Rear rack is an Axiom Journey; front
is an Old Man Mountain Sherpa that Jon modified to attach to the
braze-on* instead of through the hub.) Waterproof bags (Typhoon &
Monsoon) are made by Axiom. I chose two different colors so it will
be easier to see which go on front & which goes on the back.
I know that once I get there I might have to change my route because of detours or if I don't like a road, but having an initial idea of the route and the distance gives me some peace of mind about the journey.

On Thursday, I was at the dentist getting my teeth cleaned and told Yvonne (my hygienist) about my plans. She was pretty excited about the idea since she knows I like to travel & especially like to ride my bike. When we told the dentist where I'd be this summer, his first question was "by yourself?" I appreciate his safety concerns, but suggesting that it's not a good idea for a woman to travel alone is just, maybe a little paternalistic. I mean, what if a woman were to ride her bicycle for 10 miles in the Chicago suburbs? How about 20? What distance becomes too far for a woman to travel solo? I did what I usually do when a guy suggests I won't be safe: I shrugged it off.

The year I moved to Alaska, I drove by myself from Milwaukee to Anchorage (okay, I caravaned from Haines to Anchorage with a couple guys I met on the ferry in Southeast). Before I left, some people expressed concerns for my safety. One friend gave me some mace. When I told people I was bringing my dog - a somewhat dopey Gordon setter - for some reason they felt better. I felt no safer, but maybe it made them feel better about watching me leave, to know that although they could not prevent me from going, nor protect me along the way, this dog would be there to accompany me...

Lots can go wrong on a cross-country trip. Things can also go wrong on a cross-town trip (I know a guy who was mugged & had his bike stolen from him on a trail right here in Anchorage last year). I'm not going to let the possibilities of what can go wrong stop me. Because lots can also go right on a cross-country trip. I can meet people (hopefully also on bicycles), see the countryside, stop in parks, see some wildlife and enjoy some beautiful early summer days.

Despite what it may seem from what I've just said, I'm not a big risk taker. Ask Jon. He'll confirm that in some ways I'm a big chicken. Which might be why I feel pretty confident. I trust my instincts; if something doesn't seem right, I'll follow that gut feeling and change my plans. I've backtracked on trails when I felt uncomfortable with signs of bears. But I also mountain bike alone quite a bit, so turning around every now and then doesn't feel like a big deal. I don't want fear of the negatives that could happen stop me from going on an adventure. Remember how long it took me to finally get into a small airplane?

I'm watching the weather reports (90 degrees yesterday!?) and making some lists to prepare for my trip. I'm looking forward to pedaling through southern Wisconsin. If I happen to steer a little off-course to visit a cheese shop, that's just another part of the adventure!

*This post has been edited to correct the spelling of braze-on (I must have been hungry when I posted, because I spelled it "braise.") Here's a link to the definition. Thanks to Jon for pointing this out without outing me...
Posted by bikegirl at 10:51 AM

Cool... I rode the Elroy-Sparta trail when I was a kid.