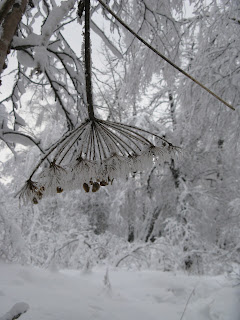 Pushki, more lovely in the winter.
Jon has been busily insulating the garage and front entry for the past month or so. All his days away from work have been dedicated to the task. I've only managed to coax him into the outdoors a few times. A couple of his friends have called to tempt him to go out to play, but he has stuck to his task with the same dedication to which he approaches berry picking and mushroom hunting: complete, single-minded focus. I sometimes wish I had his level of focus, but often revel in my scattered approach to life, bouncing from one idea to the next great thing. (I'll refrain from digressing.)

Yesterday, in honor of the winter solstice, Jon agreed to go for a bike ride with me on the snow bikes. He looked at the kitchen calendar to remind himself when his last bike ride was: a month and a half ago! I remember talking with him before he rode home from work that day, suggesting that since it was snowing he might want to drive the shop truck home instead of his new road bike. Instead, he hopped on his bike and began what I thought would be a miserable ride. Instead of miserable, he said it was invigorating. He enjoyed riding on paths that were just barely covered with the first sticking snow of the season. He told me he liked feeling like he was the only one out there, and feeling that he had just gotten away with something. He was beaming like a little kid who had just mastered the wheelie.

I've had that feeling before. In 2002, the first fall the shop was at Huffman, we still didn't have snow in late November. The day before Thanksgiving I rode my road bike into work, trying to stretch the skinny-tired season as long as I could. Rain began falling in the afternoon. As we were closing shop for the evening, I called Jon at home to see if he needed anything from the grocery. He thought I was calling for a lift home. I insisted that I ride, hating the thought that he would drive 10 miles (20, round trip) so I wouldn't have to ride in the rain. I had my jacket, I told him. No problem.

It turned into one of my more memorable commutes as I pedaled through the darkness on the wet paths, branches dripping, cars splashing. My headlamp barely cut through the big raindrops. I thought of everyone making last-minute trips to the store to prepare for the feast the next day while I reveled in the rainy evening. Rides like these imprint a powerful memory that helps see us through until the next time we can enjoy the experience of being on two wheels. They also give us bragging rights we feel we deserve for being considered tough, if only for that one time.

It took awhile for Jon to get his Pugsley dialed in for yesterday's ride, but we were able to leave the house before noon to bike around on the Campbell Tract and Bicentennial Park. The wind hadn't yet picked up so the trees were still covered with snow. Narrow trails were still setting up after last week's multi-day snowstorm. 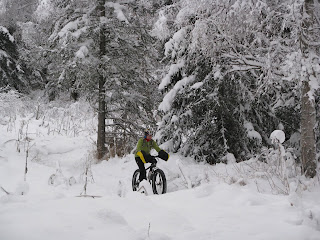 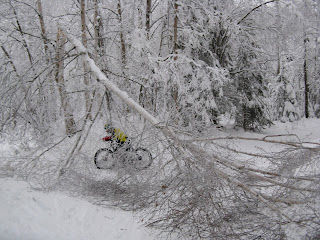 Jon detours around a birch tree. 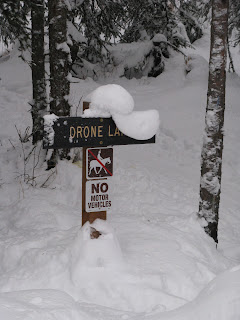 Looking good, but we were running out of time!
We made a wide loop around the park on what was a warm first day of winter. A chinook is pushing into the Anchorage area. I don't want the trails to melt and get icy. Another couple days and the skinny trails will be perfect. I'm greedy to hang onto the mid-twenty-degree perfection. I'm thinking cold thoughts. I'm thinking Christmas Eve ride.
Posted by bikegirl at 6:16 PM