get yourself to the film fest 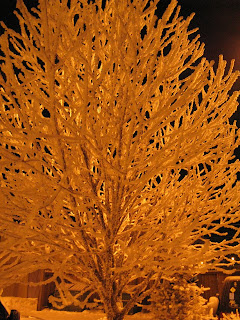 Outside the Bear Tooth, December '08
Early December is film fest time here in Anchorage. I'm sometimes surprised how many people don't know about it or don't take advantage of the opportunity to see a great range of films that are out of the mainstream. But it is a busy time of year with parties and gift buying, friends traveling, students studying.

But if people can take some time out of their schedules to slouch into a theater seat, they'll be surprised at what they see. The Snow Dance portion of the festival has films about life in the northern latitudes (or extreme southern lats.) and several were filmed right here in Alaska. But it's an international fest, so one night you may see a movie filmed in Sweden, the next in Japan or India. Of course there are also films shot in the Lower-48 and in other countries around the world.

One of my favorite film fest moments was several years ago, when, for the opening-night gala, they built a screen out of snow outside Bernie's Bungalow Lounge and projected clips onto it throughout the evening as people wandered back and forth between the warmth of the bar and the chilly courtyard. I don't think the screen lasted more than a few days because, like every year in December, a Chinook rolled in, as it did earlier this week, melting the screen.

Maybe that's why I liked it so much, moving images on melting snow. Under-dressed women acting like they weren't cold. People trying to act cool because who knew when an up-and-coming director would show up? As if people were trying to convey: We're hip Alaskans. We do this all the time!

Well, I'm not particularly hip, but tonight I'll go to a Russian movie "Hipsters, (Stiljagi)" which will kick off the opening-night festivities. The party is included in the all-events passes Jon and I have, as are a few clinics on film making. I hope to take advantage of some of those in the next few days. Maybe someday, I'll be able to make something that's worthy of the festival. We shall see.
Posted by bikegirl at 3:48 PM