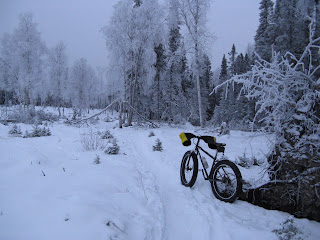 On Sunday morning, I went for a bike ride. Fog had coated the trees and grasses, signs and benches. Even the weeks-old snow was covered with a layer of hoarfrost, its crystals standing on end, electrostatically charged. The temperatures for the last week or so were perfect for snow biking, yet I had spent evenings watching films and days getting our house put back together, painting our stairway and generally being a responsible adult.

But all Alaskans know that when conditions are perfect, you have to drop everything and get out. Lucky I finally did, too. Because snow started falling on Monday and now the buff trails are under more than six inches of snow, which will take a few days to get packed down by various trail users, including a few snow bikers no doubt pushing their fat-tired rigs over some sections of trail.

The winter is long and there will be other chances to ride. But getting out while the frost still covered the trees was a treat. I was the only biker out there and didn't run into anyone on the singletracks as I kept myself moving, aware I wanted to attend a workshop in just a few hours. Knowing I needed to do some time in the saddle instead of just a movie theater seat.

Now I expect branches will begin to break under the heavy snow load, unless a big wind comes first, which is unlikely in the next day or so. I'll get out on skis or snowshoes. Catch a bit more of this snowy weather. Remind myself that the only way to get through a winter is to embrace it. Often the embrace is sweetened by an airline ticket to someplace where I can wear tank tops. 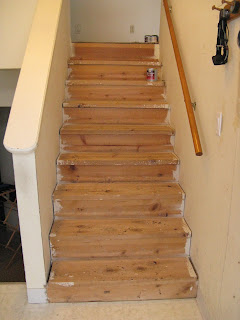 After Jon removed the carpet. (He plans to rebuild
the stairs so they're not as steep.) 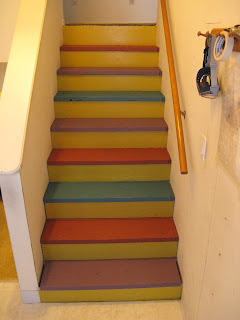 Paints from the mis-tint bins at various hardware stores. 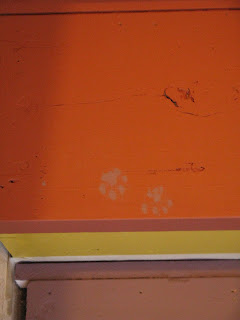 A little signature from my friend.
I don't know if there'll be a tropical vacation this winter. If not, I'm okay with that. We're moving forward on the house, I have some creative projects in mind and I'm ready to bike, ski, snowshoe or skate. Unlike last year, I have no injuries. It could be a great winter.
Posted by bikegirl at 9:39 PM

I really like the colours with which you have painted the stairs. Very fun!