I was out riding today and saw a group of bikers. I thought maybe I could latch onto the tail end of the group but quickly realized they were riding much faster than me. I then proceded to ride a loop on some singletrack, then, the more I rode, the worse my riding got. I couldn’t hold my line and kept veering off the narrow trail. Snow just off the side of the trail was well over a foot deep. I had one wreck where I landed on my side, the top tube crashing onto my inner thigh. Then I struggled for a moment to push the bike up and off me, twisting my shoe out of the pedal while I lay there in the snow. I felt pretty darn alone. And, I'm not sure why, but it made me think back to those Christmases when I was a child.

I remember the anticipation. On Christmas Eve we’d go to evening Mass where there would be singing and candles. A long event. One year someone my mom worked with had given her a box of clothes and I had gone through it to pick out a red dress with a velvet collar to wear to church. I felt very dressy. I also hoped that the girl who used to own it didn’t go to our church. I was always very aware that we didn’t have much money, particularly for anything frivolous like a Christmas dress.

I remember waking very early on Christmas day, going out to the living room and even falling asleep near the tree or on the sofa waiting for everyone else to get up. I don’t know quite what I expected; some magic, I suppose. Some fantastic gift I hadn’t dared ask for, lest I be disppointed when it didn’t arrive. There was little on my list for Santa and no visit to sit on the jolly man’s lap. That only happened on tv, not real life.

I remember a year my mom made up buckets for each of us; they were gallon ice cream buckets collected over the past year, each with a name on it. Inside was candy. I don’t remember what else, maybe crayons. We would get necessities like new underwear. I must have received a toy, but I don't remember any specifics. The younger boys might get a model car to build or matchbox cars. I don’t know what the older kids got.

Many of the gifts were listed to “Austin Family” and they were from Santa. These were usually board games like Monopoly or a new Scrabble game. When I was little, I didn't give much thought to the family gifts. With my childish, self-centered nature, I wanted something special just for me, like my cousins had. Something big.

My two cousins, aunt and uncle lived on a dairy farm just up the road from us. Each Christmas our Aunt Maxine would visit, staying overnight at the farm, visiting us for the Christmas meal. I remember my cousins would brag about the gifts Maxine had brought them: sleeping bags were the gifts one of those long-ago years. But, as Aunt Maxine sat on our sofa chatting with my parents and older siblings, I wondered why she hadn’t gotten me anything. Why had none of us received gifts from her? My feelings, always sensitive, were hurt. I didn’t think she loved us, and if she did, she didn't love us as much as she loved my two cousins. I kept my emotions distant and never asked anyone about it. Even back then I tried to rationalize that maybe it was just easier to get something for my cousins because there were only two of them while there were 10 of us. 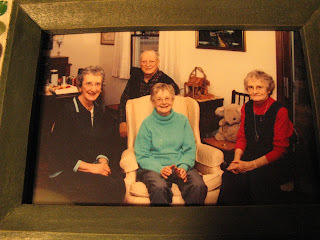 Aunts Anna Mae (my traveling partner in Italy last year),
Maxine & Margaret with my dad, John, in the background.
These thoughts were long forgotten until sometime after Aunt Maxine died in 2006. I was talking with my oldest sister about how hurt my feelings had been over the Christmas slights; how jealous I’d been of our cousins. That’s when she told me that all the gifts labeled “to the Austin Family” were bought with money Aunt Maxine had given my mom. Maxine must have figured Mom would know better how to buy for the family than she would. And Mom did a good job over the years. I only wish she would have given credit to my aunt instead of to a large, strange man I’d never met. For without the credit, I never knew to thank Aunt Maxine.

This holiday season, I want to say “thanks” to all the people who deserve thanks but have never received it. And thanks to Mom for doing the best you could.
Posted by bikegirl at 4:51 PM