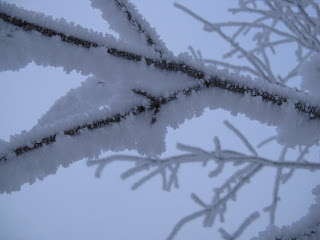 It doesn't necessarily mean there's anything wrong with a movie if I nod off during a matinee. The middle of the afternoon can be a great time to nap, though I'm more of a summer nap-taker than winter. That may seem counter-intuitive as we sink into the shortest days of the year, but I get plenty of sleep at night in the winter, maybe too much; in the summer, not so much with all the staying up late into the daylight evening and getting up relatively early. But I was kind of bummed that I woke up to catch the credits of the first of a pair of docs I went to see.

It was an interesting film about the moose of Denali and the filmmaker's relationship with his moose biologist dad. I was just tired and really needed a coffee. I felt bad that I missed the ending.

I managed to stay awake during the second film of the double-feature: what turned out to be a pretty boring film about people climbing Denali. Really, should a film about climbing the tallest mountain on the continent be boring? I didn't think so, but I wonder if other people had the same reaction I did. What started out as a little introduction of each person in the climbing party and what they hoped to contribute as well as what they planned to get out of it turned into a sort of Denali travelogue. (Camp 1, Camp 2...) Everyone made it safely to the summit and back, which is the goal, of course, but I didn't feel much passion or soul.

I sometimes worry about that in my writing. If nobody gets hurt, can it be a good biking story? If everyone starts and ends a weekend in a remote cabin as friends, does anyone care? Our lives and the fictional lives we see in books and magazines, on television and in movies are filled with conflict and drama. Well, my personal life with Jon is not filled with much drama. Even through the first stage of the remodel we remained relatively sane and calm. The biggest drama here revolves around Jon's serial obsessions with harvesting fungi and berries from the mountains and woods. My coping mechanisms include declining invitations to pick when I know he'll spend all day in a berry patch or bringing an alternative activity: my bike, a book, a notebook. Sometimes, all three.

Don't be mistaken, our lives aren't boring. There just isn't much conflict. Without conflict, where is plot, I wonder, as I try to develop characters or even write a personal essay. Of course, some conflicts are purely within us; the struggle with our own fears and insecurities. We must overcome our own hurdles just to put words on a page. That hurdle often stands between our comfort zone and the truth. As writers we want to get at the truth. Sometimes truth lays between what we think we know and what we say. They are sometimes the scraps we cull before even putting down the words. In my writing, so many things are left unsaid because I'm too afraid to take it that one step further. Why?

People will think less of me. Think I'm strange. My convictions are weak. My ideas are lame. Nobody will understand.

But if writers and filmmakers are unwilling to take the step into self-discovery or a character's self-discovery, then what is the point? We read or go to films to learn new things and to make connections, to relate, to understand ourselves and the people around us. We might learn that despite apparent differences, we are surprisingly alike. We need to be reminded of this often, lest in our self-centered worlds we forget that across the planet or across the street, someone else is having a similar thought. Maybe experiencing a similar alone-ness.

I began thinking about this after seeing a film on Monday night: Prodigal Sons. I read the blurb ahead of time. Though it seemed to give away a lot, it actually gave away very little. But, experiencing the film told me some truths I've been learning within my own extended family, which I won't go into here. It went deep into talking about identity, labels, how we see ourselves and how we think others see us. What makes us who we are? Can you truly reinvent yourself? Are we our history? It made me wonder how society can foster understanding besides one person at a time?

Now it's almost a week later. The film fest (and painting my stairs) has absorbed all my attention. Over the last several days, I've seen films that have raised my awareness on all sorts of issues, big and small. I suppose there must be a few blockbuster movies in the theaters right now but the fest brings us mostly small films. Sometimes the filmmakers or actors are here. We can actually ask the filmmakers what they meant and understand their answers. I love the film fest, but it will be a relief when it's over... maybe I'll send out some holiday cards.
Posted by bikegirl at 7:19 PM