Spring is a long, awkward season in Anchorage. The streets and paths vary from crunchy ice to slushy, from running rivulets to ponds, or even dry and dusty. And that's just within a mile of my house. Turning it into a nine-mile commute just means I'm grinding through more bumpy, crusty ice in the morning. In the evenings, it's slush and running water with a cover of ice that's as fragile as the crust on creme brulee. What flies up from the trail is not nearly as tasty. (Note to self, re-install the front fender that fell off last week while riding the very bumpy trail.)

This week I tried it all. Commuting with the studded-tire bike, described above. Then on Wednesday, after hearing that the road conditions were shaping up on the west side, I installed pedals and a saddle on my road bike and hauled it across town in the car to check for myself. Despite a little water on the road in places and some sand and gravel on the sides, it felt great to get out on the light, skinny-tired bike - it probably weighs 10 pounds less than the commuter!

Around the airport, float planes were tied down on the shore of Lake Hood. Others were still out on the lake, though they'll have to be removed before the ice melts. Soon. After riding on the smooth roads, effortlessly accelerating away from the intersections, the thought of getting back on the commuter just is not appealing at all. I'm done with it. I want to be on something light and fast. Something that is silent, instead of filled with the buzzing vibration of each carbide stud as it hits the pavement. Then today, I had a chance to do a snow ride.

Yesterday, Jon had the day off and hit the snow trails in Bicentennial Park & the Campbell Tract on his Pugsley. Hardpacked and perfect, he told me. So after breakfast, we headed out on the snow bikes. A little soft at first. Dirt was starting to show through the white snow. Ash is still on top of the snow, making it melt faster. Tour of Anchorage. Blue Dot. Getting softer in the open areas where it gets more sun. Lower tire pressure helped. Baseball Boogie had some ice on it. Last time I rode it, everything was hardpacked - in prime condition. Then we made our way to the Trail of Many Names (Area 51, Regen., Speedway) where, had I followed my instincts, I never would have ventured. 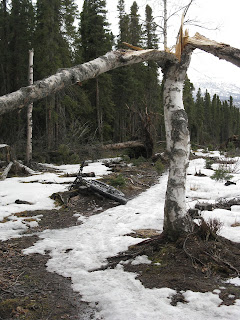 see what I'm mean?
The section that skirts the meadow was so rotted that every tree root and stump was exposed. Mud and slush, I walked a bit, looking around the meadow at plants that have started emerging from the snow. A moose chewed on the bark of a downed tree. Back in the trees, it was mostly rideable, until we came to a few more open areas. 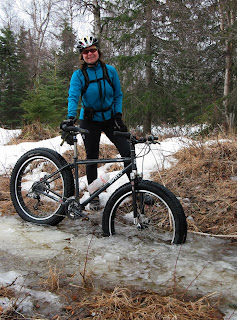 anybody for a slushie?
A ride like today's, while fun, signals an end for the winter riding season. Unless we get a late snow followed by some cold weather, this was it for the Pugsley. Now it's time for a month and a half of pavement riding until we can ride on the dirt trails in June. Ah, June. It seems so far away.
Posted by bikegirl at 10:30 PM