it's about the pants 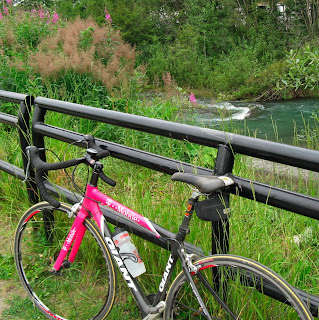 my little racer, on the Ship Creek trail summer '08
I was talking with my stylist this morning (yeah, I know: make sure my hair looks good when I take off my helmet) telling her I planned on a bike ride later in the day. That's when she said she doesn't like biking. So I asked her why she didn't like it. Any guesses? Yep, without giving any details, she said it hurts her bottom. We all know what she's talking about, right?

And just like so many customers I've helped at the shop, I let her in on some little secrets: some saddles are shaped better for women and those pants we wear, they're padded. It was her "aha moment" and she even pondered aloud trying biking this year because it might just not cause her to suffer.

This time of year people are reminded that there is a bit of a break-in period for their posteriors when they first return to the bike after a long winter. But none of that pain should be the kind of pain that makes your... you know... your "stuff" hurt. If it does, you've got to change something. Shorts and saddles are no place to scrimp. If it doesn't fit, get ride of it!

Though I've been on bikes much of the winter, it's always an adjustment to be on the road bike again. A few miles into my 20-mile ride, I made a small adjustment to my saddle. No point in thinking I'll remember to fix it later; better to make the change when I notice it so I'll know it's dialed in for the season.

Despite enjoying a little speed on my outing, I'm still at heart a mountain biker and a cycle tourer. The fact that I signed up for a short road race does not mean I'm a racer. It just means that I decided to set a goal for a change. So, here's my goal. Back in 2005, my time was 30.21 (35th place!). I'd like to do as well as I did that year, but I know it'll be hard. There are only two more weeks to go. I'd better do a few commutes on the road bike to get more comfortable with the handling again. Then just ride, ride, ride.
Posted by bikegirl at 6:33 PM

Email ThisBlogThis!Share to TwitterShare to FacebookShare to Pinterest
Labels: Bike for Women

Wow! That picture just made me realize how much I am starved for summer. I have been staring at it and drooling over it.

The road bike next to tall grass or Rabbit Lake?
...either way, me too. I'm so ready!