One way for me to motivate myself in the springtime is to sign up for an event. On May 3rd, I'll do a short race called the Bike for Women. When I say "short," I do mean short, at around nine miles. About the length of my commute. But the race gives me a reason to build my miles and actually push myself. So, on Monday, I'd planned to do my second ride of the season on the road bike. That was before we got about a quarter inch of snow overnight.

Plan B was to ride to an early evening meeting. But, which bike? That's when I pulled the single-speed from the wall, aired the tires and installed the pedals. Wiped a little gunk off the chain and called it ready to ride.

Though I'd taken the road bike out last week, I still had in mind the weight, sound and resistance of my winter commuter with its SnowCat (44mm) rims and studded 2.3 tires. Do I need to tell you that riding that baby is a little tiresome when 90 percent of my commute is free from ice? But the full-fendered ss was just the ticket. Tires not too narrow when riding through all the sand and gravel on the path, the bike was almost silent, except for a little rattle of the fenders when I went over bumps.

Next day I rode it to work, keeping up with Jon on his 29er studded bike. The only place I couldn't ride was on the short stretch of the Tour of Anchorage route where the hard-packed snow trail from a week ago is giving way to slush. Jon had to push for part of it as well. Pretty soon we won't be able to commute through the park; it'll be too muddy. But I didn't mind walking my little friend down the trail. 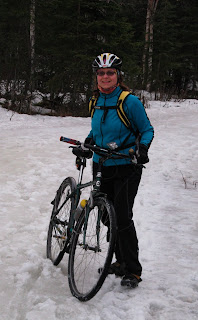 here's my little buddy
Yet, I still haven't figured out why I enjoy riding this bike so much. It's the simplest in the fleet, and there's nothing new-tech on it. I wonder: Is it because I don't have to shift, but just decide whether to sit or stand to pedal up a hill? Is it because it has the perfect gear for me. Is it because it makes me feel strong and in balance? Is it because I can sit more upright on it as I ride through neighborhoods?

Whatever the reason, it's nice to have a bike on which I enjoy commuting, while also being so unassuming that it doesn't draw much attention when it's locked in a bike rack.

Now, as the snow continues to recede, I will put more miles on the road bike so I can be comfortable with the handling for the race. My goal is to be as fast as or faster than my time from 2005. (Will have to find out what it was!) Next week, I'll be sure to get out on it for a long ride, I just hope the single-speed understands.
Posted by bikegirl at 11:19 AM

I love how much you love your SS! We all adore our high tech bicycles and gadgets, but there's something so delightful and refreshing about our simple rides, whether it's the SS or a cruiser. It fits into my desire to live a slow life...to take in the sights while I ride, sip on coffee, and talk with others while I ride...ahhh...it's just like slow dinners with good friends and smooth wine. I can't wait to ride;)