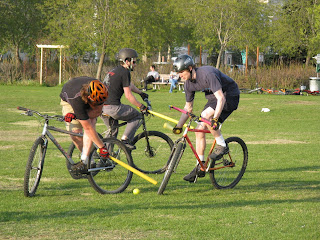 "Redbeard," another guy & Brian
A couple weeks ago I biked to the Park Strip after work to witness the first bike polo game of the season. It looked brutal. Carnage. Wheels got broken; lots of crazy energy. Two college-age women I work with, Andrea & Tapia, tried it out while I hung around taking photos.

Last night I rode downtown again since the girls were bringing their new masterpiece - a polo bike to share. It was pieced together from a frame and other used parts. It was Tapia's last night in town before heading to the lower-48 on a bike tour. So it was also a bit of a farewell celebration. 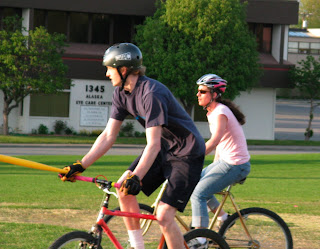 It was a smaller group this time, playing a manageable 3 on 3. Most of the mad-men weren't there. So, I took my turn on "Candy," the new polo bike. It was sometimes scary, mostly fun and took some concentration and lots of quick handling. It was pretty satisfying when my mallet actually made contact with the ball. Not so great when it bounced off my spokes and rolled the wrong direction! It'll take some practice to get better.

For a few moments I thought it doesn't really make sense for me to be out there playing polo & that maybe I should act my age and not hurt myself. But it was just so much fun and it doesn't really matter whether anyone else thought I wasn't a good player. Most people aren't. It's getting out there and giving it a shot. That's what it's about, right? Besides, if someone can tell me what it means to act my age, I'll give it some thought. 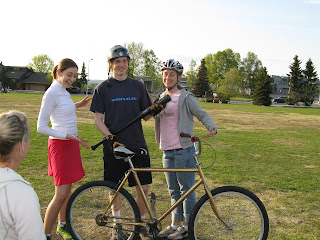