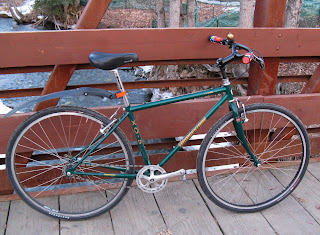 Last week, I finished building the single-speed. I did a quick spin around the neighborhood just to see how it felt. Saved from the recycling bin, it's pretty old school - ok, v-brakes aren't that old school, but compared to the discs, you know what I'm saying.

A steel frame & fork, used parts that were one step from the boneyard at work, it has Avid brakes, old WTB hubs. We laced new rims onto the hubs. New handlebar & seatpost. The grips I bought years ago for an old Schwinn Cruiser I used to ride. I never put them on the cruiser. Now they make a great way to dress up the ol' Bridgestone. 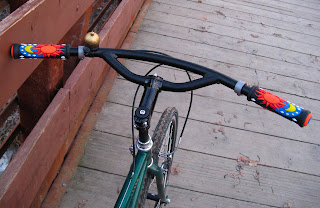 Those older bikes, though, sure made people lean over. With the use of a handy part called a quill stem extender I could get the handlebar high enough that it's pretty comfy.

So, this week, I took it on a short five-mile round trip to a meeting. The skinny tires are pretty quick to get rolling, then just stand to climb the one little hill on the route. Pretty smooth. And it has what my co-worker calls the "magic gear." the 38x18 gearing doesn't require a chain tensioner to be taut. So for now I don't need the used tensioner that was given to me.

Yesterday, I decided to ride it to work. It's just shy of nine miles each way. Smooth, fast and light. I can't describe the pedaling on this bike. Once the instinct to try to shift was suppressed, I just rode quietly to work. I could get used to this.
Posted by bikegirl at 4:30 PM

Welcome to the dark side. It is hard describing a SS to someone they just won’t understand it until they try it for themselves!