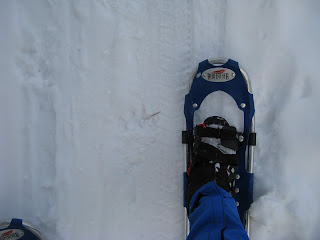 Not a bear track.
I had snowshoed up Rover's Run and had just turned onto Moose Meadow trail when I heard someone behind me calling to someone. I heard the voice a few times, then turned around to see a dog and skier heading my way. The skier had something to tell me. It turned out to be someone I knew. Jerry is a former park ranger and now owner of a great little bakery in town. Someone had come up to him at the trailhead (not even a mile from where we were now) and told him they'd seen a brown bear near a mushing trail. Yes, on February 28, in Anchorage. Are you sure? he'd asked. They were, but he cautioned me that they looked like tourists.

What does a tourist look like in winter? Probably someone wearing tennis shoes and jeans, no hat and leather driving gloves. A person dressed this way could easily mistake ursus arctos horribilis for a large dog. I know I've done double-takes where on first glance I've mistaken a dog for a bear, or the other way around. Nevertheless, bears do sometimes wake mid-winter and ramble around the park looking for a snack before returning to their dens, so Jerry felt he should at least tell me. I laughed a little when I told him I planned to hike Black Bear trail, a known denning area. I jokingly promised that the first thing I would do if I saw one was to snap a photo.

We went our separate ways, but now my stomp on the trails didn't feel like a solo hike. I felt I had company, my unseen companion: a groggy, somewhat hungry bear. I turned onto Black Bear and followed a solo fat-tire bike track on the narrow trail. There were footprints from a hiker, too, but once I turned onto the Paper Plate trail (so named for how the impromptu trail is sometimes marked), it was just me following that lone cyclist's track through a few inches of fresh snow. 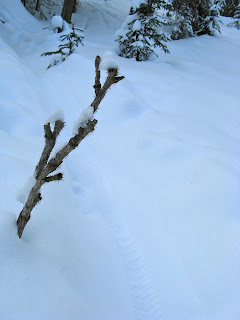 Devil's club and tire track.
In places the rider rode so straight that the front tire's tread disappeared under the track left by the rear tire. On corners, I could see where the front tire had dipped into a groove or made a smooth arc so that the pattern left by the two tires resembled the outline of a crescent moon. The trail was carved so narrow in places that I could see where the rider's boots had hit the snowy sides of the trail at regular intervals, following the rhythm of the pedal stroke. Occasionally, I'd see footprints and know that the rider had gotten off the bike to walk.

Around me, I could see where days old animal tracks were now only a line of dimples in the fresh snow. In some places the spruce were so close together it would have been impossible to squeeze between them. In others, they were scattered about, decorations in a wide meadow. I watched for fresh animal tracks and thought about the bear. I wondered if it was really out there, awake. Earlier in the day I had been re-reading David Quammen's Walking Out, a short story which features a pivotal scene with a bear. Is this coincidence, I wondered.

Meanwhile, I followed the bike track. Soon, I noticed human-sized divots in several places on either side of the trail. If I looked closely, I could see the rider's shoulder, body, head, even a little dent from a helmet pressed into the soft snow. On one divot, I could make out the bike wheel's impression and see what kind of tire the rider was using. I laughed to myself and remembered friends referencing a problem with gnomes on the trails, this trail in particular. Gnomes who jumped out and pushed riders over before the rider could know what was happening. I had sometimes imagined myself as one of those gnomes on snowshoes, pushing my friends over because they were having all the fun.

But there are no gnomes and there was no bear for me today. The gnomes are safely hidden in story books and backyard gardens while I hope the bears are still napping. As I crossed a wide meadow on a more familiar route, ravens flew above. I stopped to listen as their wings whooshed through the afternoon air and they called out to their companions. Maybe they saw the bear or the gnomes but they weren't telling. They were heading back to the mountains and I was heading home.
Posted by bikegirl at 7:30 PM

so lovely!
can you get the "email subscription" gadget on your sidebar? i know, i know, i'm pushy. :-) it's easy to add and blogger provides it. that way i won't have to "surf" the web (which i don't do) to keep up!
~katey

Oh, man! That's a really nice piece. It makes me wish winter was still here! Thanks so much.

Gus, thanks. Still enjoying winter here, though plenty of people are ready for it to be gone. Just read your latest. Will comment there when I find the words.