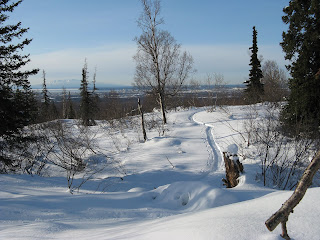 We followed the trail until we could no longer
find it, then backtracked to where we'd begun.
I plod away at the novel. It began as a short story, grew into what I was calling a novella, then exploded into 49,000 words that is nowhere near the end. I didn't think I could do this; sometimes still think I can't do this. Yet I feel compelled to shine the beam of imagination around to find my way to the ending. See a thread, which do I follow?

A few times in the last two weeks, I've gone out on the snowshoes with a couple different friends. Each time, we ventured to the singletrack network* that fills the forest between Prospect Heights and the Hillside. On the blue loop snow that fell a few weeks ago had been tracked by skiers, walkers and dogs, but I wanted to get away from where others had trammeled, to break trail onto the soft powder. To me, breaking trail is the best part of snowshoeing. A week ago Monday, I suggested to my friend Jo-Ann that we take the red trail called Hornet's Nest. From the Llama Trail, we joined The Hive, then cut south onto Hornet's Nest.

We followed a slight impression in the snow that indicated we were on the trail, wound along contours that define the trail system. We followed the credit-card sized red markers that were placed intermittently on the trees, but soon we lost the route. Whether it was from a downed tree or drifted snow, we could see neither trail nor marker. Short on time, we doubled back and promised to try again. On Wednesday, I snowshoed with my friend Gloria during a storm that would cover the trails with another 6-8 inches of fresh snow. With low visibility, we stuck mostly to well-used routes. Two days later I returned again with Jo-Ann.

We tried another tactic. Snowshoeing down Llama Trail, we turned left on The Hive, heading for the Gasline. At the Gasline, we took the short access trail to the Hornet's Nest, heading north. Arriving at the trail, the signpost was almost completely buried in Anchorage's near-record snowfall: 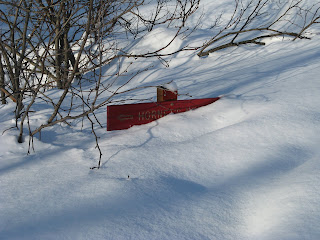 If we turned right, maybe we could connect with the route we'd started on earlier in the week, but left would give us a longer snowshoe. We turned left. What was at first an obvious trail soon disappeared. Again, we couldn't find a trail marker or see the route. We followed our tracks back and hiked the blue loop instead.

While I appreciated the speed at which we could hike the blue loop, the packed snow is a little more jarring to snowshoe, with no cushion to soften each step. And breaking trail would have kept us out there a little longer than we might want, though in mid-March, we're running on surplus daylight. Having started our little adventure at around 5:30, we returned to the car before 8 pm and the sun had not quite set across the inlet.

This week, I've been trying to work more on my writing. I'm trying to get through the rough spots, poking around at my characters to aggravate their tempers. Get them to speak their minds. But I really needed to get out. We've had clear blue skies for several days and warm daytime temperatures that are melting the snow from the streets and roofs. But the snowpack in my yard doesn't seem to be disintegrating and I don't expect to see soil for a month. Gloria suggested a snowshoe for Thursday afternoon. So yesterday we returned to Prospect Heights. I had my map and a mission: to snowshoe the red loop in its entirety. We had time since Gloria didn't have to work until 8 pm and the lecture I wanted to attend began at 7. Off we went, down the Llama Trail to The Hive and onto Hornet's Nest.

We took our time: this was no longer cardio exercise. We made wrong turns. Wondered at animal tracks, found trail markers, were distracted by ski tracks that made bee-lines down the slopes. We studied the terrain, glacier carved with its kettles and ridges. Imagined how years ago glaciers had carved down the mountain valley, leaving deposits of rock and ice. Forming those rolling hills we all drive on when we leave the glacial outwash that makes up much of the Anchorage Bowl and head toward the mountains on the east side of the city. 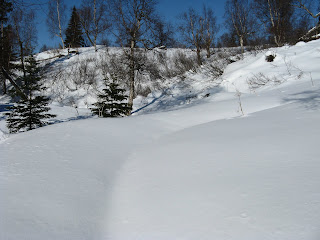 By breaking trail, we fix it for the next person.
We followed animal tracks on a route that was clear of trees and which followed the contour, then made a switchback and passed another kettle. Just when we weren't sure, one of us would spot a red marker. But with the way the trails zig and zag along the slope, we were never sure which direction to go when we reached the marker. Still, we felt we were making progress. Eventually, we were at a point of uncertainty.

We could see the Gasline, but the trail wasn't obvious. Then, through the brush, I recognized the top of a signpost. We were back on track. We followed this pattern of route finding for the rest of the afternoon, enjoying the sunshine and the challenge of looking at the snow for any hint of a buried trail. Sometimes it was obvious; sometimes it felt like a puzzle with missing parts that we had to piece together. When we finally arrived at the three-way intersection of Yellow Jacket, The Hive and Llama Trail, it was as though we'd forged a new route through the landscape. Sure, we still hadn't connected a little piece of Hornet's Nest, but we still have at least another month of winter for exploring the routes. 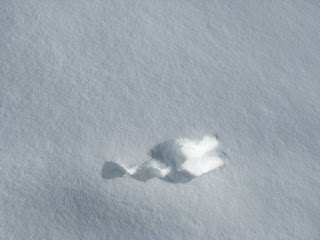 Flying snowshoe hare. I've never seen a flying hare, but sometimes
more than six feet separated one track from the next. Did not see
what it was trying to escape. Hawk, eagle, raven?
But what does this have to do with writing? Yes. It's that dance. Figuring out how to do the telling. Sometimes I feel I have accepted the challenges, but some days I just don't know how I'm going to bring this to an end. I'm not quite lost; I'm at a stuck point; a roadblock where the bridge spanning that chasm has been washed away and I don't know the alternate route. Yet I know where I need to go.

The only choice, if I'm to tell the story well, is to follow those more challenging threads. I'll have to stray from the path I thought I wanted to travel and risk taking the story where I hadn't known it would go. For on that unknown path, that links the beginning and the end, I may just find the heart and the truth of the story. I'm getting close, but damn, this breaking trail is hard!

*To follow the snowshoe routes, look at the map to the right labeled "Hillside Singletracks."
Posted by bikegirl at 3:42 PM

Sounds like you're absolutely on the right path with the novel. Trust your gut - it has gotten you this far! I loved that idea of poking at your characters to aggravate them. Reaction is one of the best ways to reveal character. Smart one you are, Rose!

i love the analogy of finding the way. and i'm glad that you're posting again.