before you beat that drum 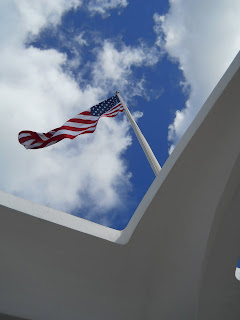 When Jon and I visited Oahu, the USS Arizona Memorial was the first thing on my list of places to go. To not visit this memorial would be like going to Washington, D.C. and not go to the Lincoln Memorial. I visited D.C. years ago and an experience I had at the monument remains strong in my memory.

After a slow start at the hostel that first morning in Honolulu, Jon and I caught a bus to the USS Arizona, arriving around 10 a.m. Visiting the memorial is free, but there are only so many tickets given out for visitors to view a short film then take a boat ride to the site of the sunken battleship. We had over two hours to go through historical displays before we could go to the Arizona. We took our time reading the information and viewing short film clips about the bombings that took place on December 7, 1941. The exhibits provided their history lessons by telling both the American and Japanese sides of what led up to the attack. Some of the most moving video accounts were those given by elderly veterans who told their stories as a part of a project to capture their memories of life on the battleships and about that fateful day.

Finally we left the bright sunshine and went into a darkened theater to get an idea of what to expect at the memorial. We sat in the same row as an elderly man. Part of me wanted to ask him if he'd served in WWII; the other part of me was near tears as I remembered my dad, knowing that he'd once been stationed on Oahu in the '50s and that I'd never asked him about his time there. After the film and a short boat ride, we stepped into the memorial.

The white memorial spans bridge-like across the sunken battleship. From the memorial, we could see where the bow and stern of the ship were marked; we could see the ship's faint outline under the water and the sheen from fuel that continues to leak from the vessel. Parts of the ship, including the turrets were above water and slowly rusting into the harbor. The attack on Pearl Harbor figured so large in the lives of some survivors that several who died years later have had their ashes interred with their fellow sailors in the hull of the sunken ship. All the names, those who perished on board and those who were later interred, are etched on a wall at the far end of the memorial, in the shrine room. 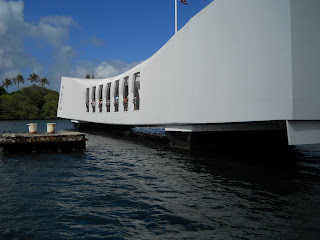 Parts of the USS Arizona are above the water line. The list
of sailors is inside the memorial on the far wall in the shrine
room. Ford Island is in the background.
Inside the room, I looked up at the names. Over 1,100 men. Brothers, sons, fathers, uncles, nephews cousins. I wondered about the men who had the same last names, remembered the history lessons about brothers dying together in battle; how painful that had to be for their families and communities.* I thought of our current political situation. Our government has just ended a war in Iraq. We are still in Afghanistan. Political candidates are beating the drum, talking tough about Iran. Campaigning with swagger. I wish every politician who brings up war would read the names of those who died in Iraq; those who were injured. The names of the Americans, the allies, the Iraqis, the innocents (those we often hear called “collateral damage” so we won’t pay attention to the fact that these were people). The names of all the people they left behind.

I think it's the least they can do.

*Further research shows how many brothers served together on the USS Arizona.

Updated:By coincidence, my brother posted this yesterday. It features a photo of our dad while he was stationed on Oahu.
Posted by bikegirl at 2:56 PM