When Jon and I were planning our trip to Kaua'i, I noticed that the last flight from Oahu to Kaua'i would give us no time to get from the main terminal to the inter-island. We decided to spend two nights on Oahu and explore a little. After all, the only things I'd seen of Honolulu were the airport and the views from a jet window.

I booked a room in a hostel* just a few blocks from Waikiki and read up a little on Pearl Harbor and the USS Arizona Memorial. We decided to skip renting a car and try out the public transit, which is supposed to be one of the best in the nation. As we waited at the airport for The Bus we noticed the sign that said "No luggage." I almost decided to take one of the more direct shuttles to Waikiki, but Jon, always frugal, didn't give up. Soon the bus arrived and the driver did not reject us or our luggage (if it fits under the seat or on your lap, it's okay) and we were on our way. When we finally reached our stop, we only had to walk a block to the hostel. 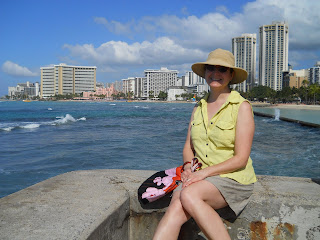 "You've won a trip to Beautiful Waikiki!!"
Anyone else watch the Price is Right as a kid?
After checking into our Spartan room (sorry, no photo), we wandered around the neighborhood looking for dinner and watching the people. It was late and we settled for a light dinner at a mediocre place where I got a salad before we strolled home for the night.

We've only stayed in hostels a few times: in California and in New Zealand. Each one is different, but we've often been fortunate to get a private room that is fairly quiet. This was not such a room. We needed open windows to stay somewhat cool, but the windows also let in the noise from bars that were just around the corner. Add to that the amorous couple in a bunk in the adjacent co-ed dorm room and it was a noisy night. In the morning, a young Euro on skype positioned himself directly under our window. When I finally got up to get coffee, I gently reminded him of the hostel's "quiet time" and asked that he not do that the next morning.

After a slow start, we headed out for the day. (I'll cover that in another post.) On our way back to the hostel at the end of the day, we picked up a couple beers at a market then sat in the courtyard drinking them as a group of hostellers gathered in an ever-widening circle around a small table nearby. We planned our evening; on a mission to find a restaurant we'd walked past the night before after their serving time had ended.

We couldn't quite remember which side street to turn onto but tried a few. We remembered a torch outside (quite common) and that it was on the west side of the street, adjacent to a hotel. We explored the side streets that connected busy Kuhio and Kalakaua Avenues Finally we spotted it and walked through a dark street to reach it: Jinroku. We chose a seat at the bar, sitting next to a man who was enjoying his meal with a beer. From Belarus, he’d happened upon the place the previous evening and loved it so much he returned.

Have you ever known you’d found a great place even before having a bite of food? This was such a place. I ordered a lychee martini and Jon ordered a beer. The small restaurant was hot and humid and full of energy. Three cooks worked the grills as we sat watching, sometimes asking the name of a dish they were preparing. We started off with some sashimi, then ordered a combination meal for two. The meal was a performance; several works of art served in about seven snack-sized courses. There was a noodle dish and eggs, grilled squid dumplings, daikon radish salad, miso soup with beef. When we thought we were full, they brought the penultimate dish and said there was more. Really? We asked for a take-out box and prepared for the dessert. (How could I say "no" to milk pudding?)

I'm not sure how long we were there, long enough for most other diners to leave and the chefs to scrape their grills clean, chatting with each other and with us. Finally we ambled slowly back to the hostel with full bellies, happy we had found this unassuming gem amongst the glitter and noise of Waikiki. And though the hostel was still noisy, the circle in the courtyard having grown larger and more inebriated, we slept better that second night and prepared for a day of sight-seeing in the city before flying over to the Garden Isle, Kaua’i. Plus, we had delicious leftovers for breakfast.

*This is not an endorsement of the hostel, but merely to let you know where we stayed. Maybe if you're traveling solo and looking for a relatively cheap place to stay in the city, go for it. I would, however, recommend Jinroku. If I ever have a need to overnight in Honolulu again, this would make it worthwhile. Here's the menu they use at their place in Tokyo. Maybe I can go there instead.
Posted by bikegirl at 4:21 PM