are we there yet? 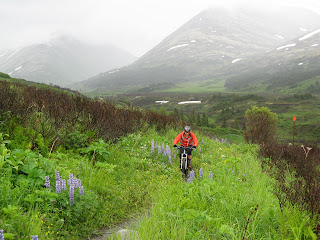 Carey with wildflowers in the rain.
Last Sunday evening after Jon successfully installed a new bathroom fan, we decided to celebrate. Dinner? A bike ride? Do we only have time for one or the other? We decided to bike to Spenard Roadhouse for dinner, knowing they were open until 11 and have pretty awesome food. We ran into our friend Alan who was dining with one of his friends, and,of course, began talking about the rides we'd done recently.

I did Russian Lakes trail the other day, Alan began. "That was the longest 16 miles I've ever done." "Um, Alan," I said. I had just done the trail two weeks earlier. "That's because it's over 21 miles." Ah! No wonder. We all laughed about it, but when you're out in the wilds, there's nothing funny about being on a trail and thinking it's shorter than it actually is. Maybe you'll run out of food; maybe run out of water. You'll bike at a different pace knowing how far you have to go. Imagine someone telling you you're running a 5k and it turns out to be a 5-miler. And you're not a runner. Ouch!

Two days later I met my friends Carey and Amber for a ride on Resurrection Trail. Carey had suggested riding the entire trail from Hope to Cooper Landing and that the 33 miles, plus a leisurely lunch break at the pass would take about eight hours. Something sounded not quite right to me. At breakfast that morning, I pulled out a hiking guidebook and broke the news: the trail is 39 miles. I could see Carey hitting the reset button as she considered how long it would take and how much food to bring. Good thing they shuttled the car the evening before.

Amber and I teased Carey as we rode along. At the six-mile mark we let her know "your ride starts now." I'm glad I'd brought the book on the trip because I didn't want Carey hitting the mental wall when our odometers hit the 33-mile mark before we passed Juneau Falls. Considering we were riding the second half of the trail in the rain, I'm glad we never had a false sense of the end being just around the next bend. 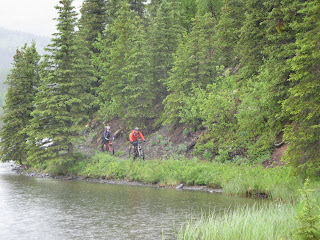 Amber & Carey at Juneau Lake, in the rain.
On Friday a similar thing happened before a ride on Johnson Pass. Only this time, it was information in a dated guidebook that mis-set people's expectations. A mountain biking book for Southcentral Alaska lists the ride as a 21-mile trail, so that's what my three companions were expecting. I grabbed the same more-recent hiking guide I'd used earlier in the week and saw that it listed the ride at 23 miles. Since I haven't biked the trail all the way through from north to south in several years, having the right number in my head at the start of the ride really helped me pace myself and not wonder, as my odometer hit 21, why we weren't closer to the fish hatchery on Trail Lake. 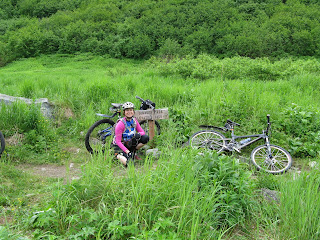 At Johnson Pass, just before the rain.
Compared to Tuesday's ride on Res., 23 miles sounded like a piece of cake, though it had lots more pushki threatening to swallow the trail and a couple places where the water was running down the trail instead of in the stream channel. When it began sprinkling just after the pass, I was a bit bummed, but relieved that we were only about 12 miles from the end. Still, a part of me was hoping the old guidebook was right.
Posted by bikegirl at 9:01 PM