This time of year means long days and short twilight, no true darkness like the planet experiences at lower latitudes. For Alaskans, it's the season of so much to do and enough daylight to do it. If you can stay awake, that is. A fishing weekend of staying up past midnight and being awake and out of the tent before 6 a.m. doesn't seem odd. But it is exhausting. 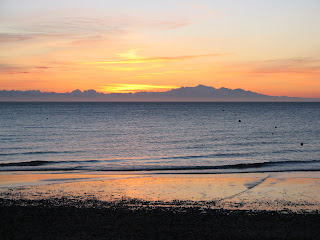 Low tide near midnight.
This past weekend, Jon and I joined friends for what is becoming a tradition: set-net fishing on Cook Inlet. It's part of what Alaska calls a personal-use fishery, and allows an allotment of fish to each head of household (25), then more for each member of that household (10 each). It's for residents only. It's lots of work, but better than standing shoulder-to-shoulder on the Kenai River trying to catch fish on a line.

We arrived Friday evening at high tide. Since we'd brought the über fat-tire bikes, we pulled a few beers from the cooler, and, leaving the car on the bluff, rode down a dirt road and along the beach to where our friends had secured a campsite for the weekend. Later in the evening, after the tide began receding, Jon drove the car down and we were able to set up the tent. We took a spin down the beach past the commercial set-netters who were preparing for their opening, pedaled into the headwind and low-angled sun. 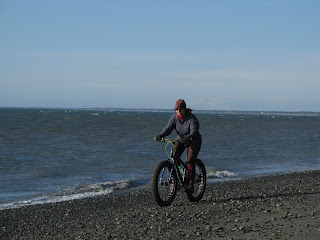 Beach riding on the Mukluk. It's not just a snow bike! 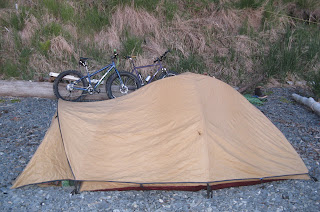 Mukluk, Pugsley, our trusty Moss tent.
Saturday morning brought the early high tide. Jon helped two other guys set the nets at 6. When they went back to sleep, Jon and I hung out on the beach watching the tide go out, drinking coffee and waiting for everyone else to get up. The previous night's wind had died down. It was going to be a sunny day. 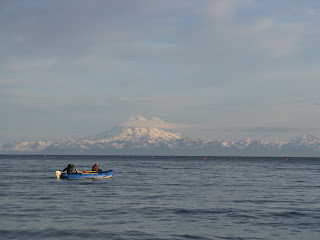 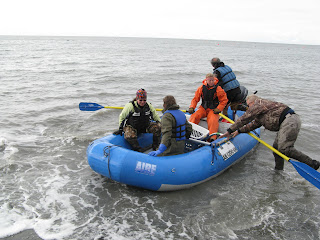 Heading out to pick fish from the nets. That's hard work.
(At least I didn't have to row!)
Last time I was at camp, I didn't have many skills to offer. I helped pick fish from the nets and got the campfire started. This year, I wanted to learn how to process the fish. When they're pulled from the net and brought to shore, we hauled them to a makeshift table where we had to remove the guts and heads and chop off the corners of the tail fins (to designate a personal-use-caught fish as opposed to a commercial fish). The fish were then rinsed and hauled to the coolers where they were counted and divvied up. 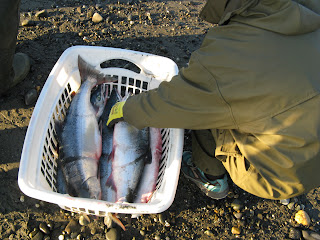 Straight from the saltwater!
(There are more photos here. Some are of
another group; some are of our group.)
Even with all the work, there's loads of downtime at camp while waiting for the nets to fill. Throughout the day people in camp took the bikes out for rides up and down the beach. Much easier and faster than strolling, riding gave them a chance to take in the other camps to see how people set theirs up. Some actually build temporary wood structures with windows!

Sunday brought rain early on and sitting under the canopy or in the tent or car didn't appeal to me, so after breakfast I put on my rain gear and hopped on the bike for my own expedition up the beach to the mouth of the Kasilof River. I soon forgot about the rain as I enjoyed pedaling on the sand or rocks of the beach, looking at the different camps people had set up, getting a wave from someone inside one of the wood structures. 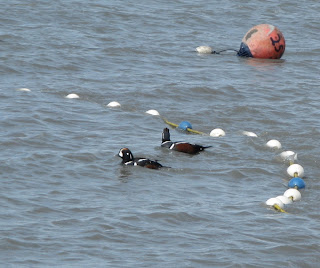 Harlequins visiting the nets.
When the crew pulled in the nets for the final time on Sunday, we'd limited out. And that limit included a king salmon. Though we'd thought about leaving Sunday evening, we decided to stay one more night and enjoy a final dinner with the gang, which included the king on the grill. Yes, set-netting was lots of work, and there was even more work to do after we left the beach, but it'll be worth every bite!
Posted by bikegirl at 8:39 PM