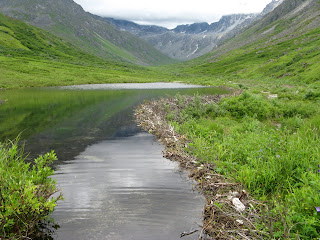 Beaver pond just before the five-mile marker.
I'm on a mission to ride some routes I've not been on before. Or routes that have been improved or built in the last few years and offer great mountain biking. So Saturday after hitting the farmers' market then watering the grass seed in the patches of lawn I've stripped of the evil orange hawkweed, I loaded my gear and headed for Hatcher Pass to bike the Gold Mint Trail. 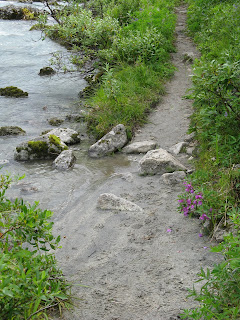 And then the trail met the Little Susitna River.
I know people worry when I bike alone, but it would have taken some effort to round up a riding buddy at 3pm on a Saturday and I figured there would be enough people on the trail that I wouldn't really be out there alone. Which did turn out to be the case, but when my rear tire spun on a loose rock on a steep little hill causing me to tumble off the bike landing on my hip and getting slammed in the chest by something, I kind of thought about it a little more.

I stood up and did my body and limb check, knowing there would be new bruises (though I didn't notice the chest soreness until I was back in the car driving home). I talked to myself. Told myself to take it easy, don't take risks. I was nearly five miles into the ride. I continued up the trail, chatted briefly with some hikers - tourists from Germany and Boston. Then I came to a spot where the main trail seemed to drop down and cross a creek that was draining through a large beaver dam, then joining the Little Su. I wasn't sure, so I checked a few alternate paths before returning to the intersection. I looked across the creek to see what it looked like. From the bank, I spotted a sign through a gap in the brush and decided that was the 5-mile marker. The trail is supposed to be bikeable for another mile after that point before becoming a steep hiking-only route.

The only other time I've been on the trail was over 10 years ago when Jon and I backpacked it. We hiked up valley, then climbed the steep pitch up to a high valley where a cabin owned by the Mountaineering Club stands. We planned to camp that night, but after a short hike to a glacier above the cabin and a change in weather to rain, decided that if nobody was using the cabin, we would sleep there. Of course there's more to this story, but we have a bike ride to finish: 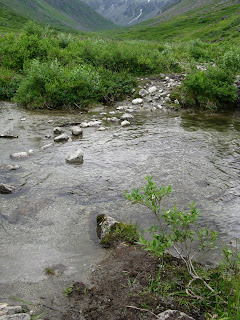 Cross here to continue up the valley.
(Just below the beaver pond.)
I looked at my watch: 6:15. It was overcast but not raining, though the trail was wet with puddles and mud from showers earlier in the day. You can do the rest another time, I told myself. Get an early start and make a day of it; bring a friend or two who will appreciate this kind of trail. I ate a snack and turned the bike around to start the descent. Boy, was that fun!
Posted by bikegirl at 10:29 PM