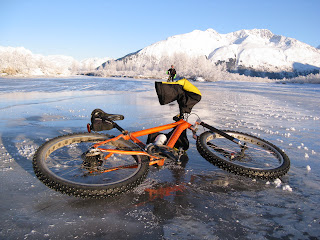 Bicycling on river ice is a bit like riding on the narrowest singletrack next to a steep drop-off, because for both, you don't want anything else on your mind. Just focus on the line. Where to ride. As soon as you stop paying attention, something bad could happen.

The worst thing that happened on my ride on Monday was that my toes got a little wet. But when the temperature is hovering in the mid-teens and you're maybe five or six miles from the car, the last thing anyone in a group wants to hear is: "Water got into my boots." Dang. 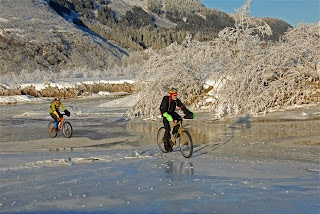 Following Jon up-river.*
It was my third ice-biking outing in four days thanks to the big melt that arrived with the new year. Snow had been blown away or melted as the temperatures soared into the 50s. After several days of warmth, temperatures dropped, freezing the mudflats and rivers. The cold refroze ice on Portage Lake that had begun to break up in the warmth. It's not unusual to get a few of these Chinook-driven warm spells followed by a good long freeze each winter, but I don't remember any last winter. That would explain why I did so much snow biking and skiing while my ice bike sat neglected until spring break-up.

On Monday, I was riding with Jon and our friend, Scott, on the Placer River. We'd started on the frozen slough between the two channels of the river that flow under the Seward Highway and into Turnagain Arm near Portage. We dropped onto the west channel, wary of the mirror-like reflection on the ice that made it look like it was still wet from a recent overflow event. Then we made our way up the river. An ice skater had been there before us which helped mark the sections of good ice.

River ice has so many different characteristics. Black or clear ice seemed to be the most solid. White ice was usually very thin and often suspended a few inches above the next thin layer which could have other similar thin suspended layers beneath it from the changes in the water level. (It reminds me of the dough of baklava which seems almost impossibly thin and flaky.) In a few places thick, clear ice held white shelves of ice in place beneath the surface. Sometimes bubbles were frozen inches below the surface. I could have spent hours just studying all the shapes in the ice. 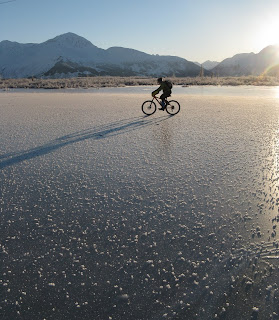 On the marsh between the two channels of the Placer River. 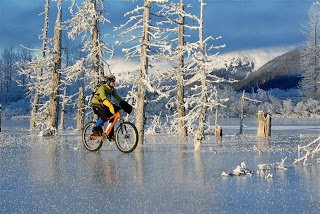 Playing among the dead trees.*

Looking at all the layers and shapes, at the frost-covered plants and cracks could be pretty distracting if I hadn't always been aware that I was on a river where the frigid water could pull me under the ice and out to the saltwater. Nothing terrrible happened when I stepped onto ice that pancaked layer upon layer under my foot. The water went into the boot before I realized what was happening and had lowered my other foot. I climbed back onto the bank and stood there. Do I take off my boots and wring out my socks? Go immediately back to the car and get into dry socks and boots? Though I could feel the water settling between the toes on my right foot and barely drip onto the toes of my left, I decided to continue on, but promised to pay attention to my toes and to the ice.

Luckily, my battery-powered heated insoles were cranking out some warmth and both my sock layers were 100 percent wool. We kept riding up-river, over some crusty snow sections that had been tracked out by snowmachines before the warm spell. Finally we reached a section where the river was almost entirely open with running water rushing from the mountains to the inlet. After a snack, and studying the situation, we turned around, and with the sun at our backs headed down-river. 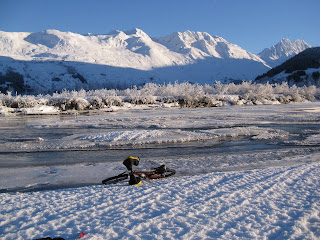 Open water on the Placer. 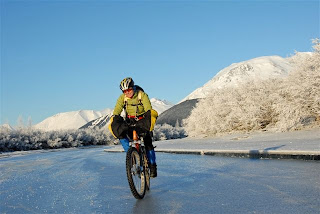 Riding where the water level has dropped.*
Sure, it's one of those weeks when the people with snow bikes are whining a bit, but having the option of riding the ice on studded-tires makes the cold days much more fun. I'd almost forgotten how much I love getting out onto the ice. 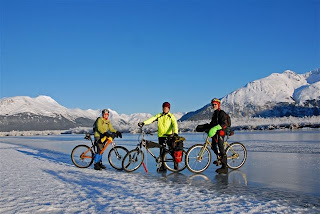 Me, Scott and Jon - soaking up the sun on the Placer.*

*These photos taken by Scott Christy.
Posted by bikegirl at 9:12 PM

Ice riding sounds like a real adventure...and heated insoles are genius! I guess it goes to show, it's all about the right equipment. Or at least that's what another ice rider thinks...

The right equipment and knowledge of the area, which Scott definitely has.