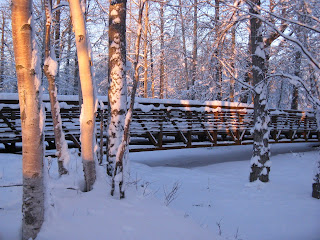 I'm starting the year with a positive vibe. Maybe watching fireworks from our friends' deck as we toasted the new year with a group of friends was just what I needed to shake loose the melancholy which had taken hold over the last few months. As we were leaving for the party, I felt I was forcing myself out of the house. But once we were there, enjoying snacks, drinks and stories, I didn't want to be anyplace else. I gained inspiration by talking about ideas and projects for this new year. I know I'm lucky to have good friends.

The first few days of the new year have been active & very productive: a snow bike ride on the 1st; helping Jon install a window on the 2nd. Loading old aluminum siding for the recycler, sorting through boxes of inner tubes, organizing my office. Oh, and not writing.

I've been trying to figure out this dullness in my writing; this fear of putting much of anything (my thoughts & ideas) into words. I'd thought about working on my fiction, but something was holding me back.

Then I got an email from the 49 Writers to attend a "Resolve to Write" gathering. I want to go. I'll know lots of the people, but before I commit I need to actually resolve to write. I started thinking about what might be holding me back. It's not that I'm lazy; I'm a damn hard worker when I'm dedicated to a project. So what is it? On Tuesday, it occurred to me: fear.

This is very strange and it all goes back to what I was working on last summer. I was trying to remember some of the things my mom had told us while growing up; strange things people did. For example, she once heard that the township snowplow driver had gotten stuck and stopped at someone's house. The woman who lived there let him in to use the phone, then offered him something to eat. She then wiped a plate on her pants leg and served him pancakes on that plate! I know; that's a crazy strange thing to do. But I started thinking about what kind of distraction could drive a person to do something like that and used that as the basis of the story. I used a few of these mysteries as writing cues.

Then in early August, I began writing something that was somewhat based on my family. It was about a woman who returns from a wilderness trip and learns that her father has died. I described how he died with a level of detail that included him falling in his bedroom, hitting his head and dying. Ten days after I began the story, my dad fell, hit his head and died. He may have had a heart attack, but that doesn't matter. What mattered and what kept flooding my thoughts when I tried to write any other fiction was this story.

It wasn't as though I was prescient. He'd fallen before. When I'd visited two months earlier I watched him standing with the wobbliness of a child just learning to walk. I saw the fall coming and I chose to write what I saw coming. So when I got the call and went back to Wisconsin, there was a certain strangeness to knowing what I'd written.

I know that what I write is not destined to become reality. (Remember that show about the little boy whose drawings come true?) And maybe writing about this event ahead of time was my way of preparing myself for what was to come. My biggest challenge is to break away from this fear I have and start writing stories that hold the same level of intensity and truth as the one that I was trying to write in early August.

But truth (even in fiction) - truth about human nature and relationships - is very tough to write about. I guess the fact that it has haunted me for all these months means that I am capable to taking my writing to an uncomfortable level. The level where the truth of human existence can be found. I think I'm beginning to understand. And I hope that through understanding I can finally sit down and embrace my writing. It's a new year; I need to write.
Posted by bikegirl at 5:03 PM

I wish you well with your writing this year and a creative spark continues to burn.
Trevor.