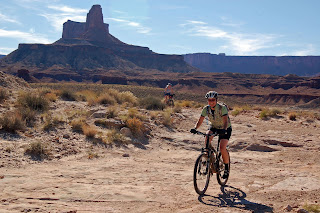 On Day 4, with wool baselayer and socks. The toe covers served me
well, but at the end of the final day, the bottoms became shredded
from climbing over boulders. My only gear casualty!
Part 4
The washout
All the photos used in this post were taken by my friend Corinne. Many thanks, Corinne!

On the last morning of the trip, I knew before climbing out of our tent that it was cold outside. I'd known it the night before as I'd left the firepan circle. Jon had held up a cloth he'd used to wash the river mud off his legs. It had frozen stiff instead of drying atop the tent. I thought of telling the girls who were still sitting around the hot charcoals, but Jon suggested that I not mention it. He was right: nobody needed to know it was already below freezing.

I could hear the low-roar of the stove as I emerged from the tent, found my wind pants in my drybag and pulled them on over my thermals. "Twenty-two," Brin told me from behind the cooking table. "Really?" The water for washing our hands had froze in the line. Camelbak hoses were frozen. My nose chilled in the morning air. It would be a long time before the sun reached the Potato Bottom campsite.

Divas emerged, some draping their sleeping bags over their shoulders to keep cozy just a little longer. They further reasoned that this way as the frost inside their tents melted, the water wouldn't rain on their gear. Coffee flowed. The sun rose. Omelets to order for breakfast. Jon and I moved our tent to the sun, shook off the water and let it stand longer. I hauled my gear to a sunny boulder, placing my black gloves over my Camelbak hose to get it to thaw. It seemed we would never get started. But a part of me didn't want to leave the White Rim. A part of me wanted to stay out on the trail with Jon and these women who kept their spirits up through wind, rain and cold.

Most of us were still in camp, packing our gear, when two cyclists entered camp. They had biked from the trailhead we were heading toward and would drive the gear van back out from the direction we'd come, allowing both our guides, Brin and Ben, to accompany us to the top of the canyon and drive us back to Green River.

By late morning we were out on the trail, going around the locked gate that closed off the washouts from all but bike and foot traffic. Climbing up Hardscrabble, I mentally prepared myself for a short but tough day. Parts of the trail near the river bottom held deep sand, some of it wet; some dry. The riding was a lot like snow riding: hold that wheel straight and just keep on pedaling. At one point, the trail had completely washed out leaving about a four foot drop to the sand below for anyone who wasn't paying attention. It took a moment to know which direction to go, but soon the gang was on track, beckoning me in the right direction through the sandy wash. This was the last time I saw Jon until the ride was done. 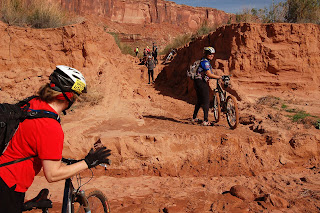 Years of sand that washes and drifts to the
canyon floor gets rearranged during floods.
Anne appears to be waving at me as I head
into the dune.
We passed an old stock corral and exited the national park (or was it the other way around?) Soon, we were at the bottom of the Mineral Road switchbacks. Since the road had washed out in August, one of the guiding companies had done a little work making a series of switchbacks so riders can hike their bikes past one missing switchback, then cross the washout and climb out of it on the other side. But before we got there, we had to bike up the start of the climb. Then cross a boulder field where the road used to be. Then climb some more.

I slurped down an energy gel, remounted my bike and started pedaling up the hill. It was surprisingly manageable; a gradual, sustained climb rising from the canyon. Rocks were scattered on the trail. I dismounted the bike where there were too many to navigate. Up ahead, I heard the cries of two ravens that were soaring on the updrafts of the canyon as the temperature rose. Their calls sounded unfamiliar, as though the Utah ravens spoke another language from our Anchorage ravens. I stood still, watching, listening. One dipped and climbed next to the canyon wall as the sun cast its twin of a shadow against the red rock. I could have watched it fly there all afternoon. Instead, I rounded the bend and climbed back on the bike, making my way toward a debris field where someone had swept the rocks aside to leave about a two-foot wide path on the road.

Anne and I reached the big washout at about the same time. Brin had been ahead of us with Jon and a couple other riders. He left his bike at the top, then hiked back down to help ferry bikes up the steep hike and through the washout. I chose to carry and push my bike as far as I could, sending Brin farther down the trail to help other riders. I wanted every inch to be accomplished under my own power. But once I reached the crossing point of the washout and saw I'd have to lower my bike more than 5 feet, I relented and handed my bike down to Brin, then climbed down to walk the bike across the rocky gap and back onto the trail. 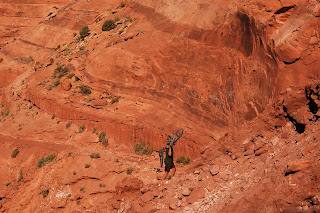 Ben shoulders a bike along the switchback washout. 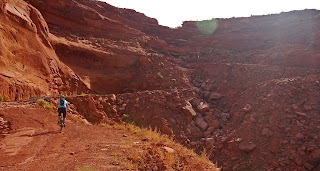 Another rider approaches the washout. 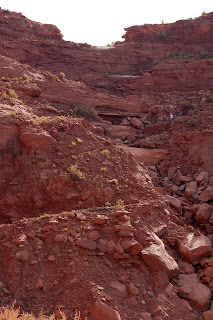 If you open the photo, you can see where the makeshift trail just
left of the washout helped us bypass the largest section of the washout.
It was pretty steep and precarious trying to carry or push the bikes
up the narrow trail. The guy in the white t-shirt is the Minnesotan
who gave us a hand. I was wrong: there is chivalry on the trail!
As people made their way up the crude hiking trail, we began passing bikes, bucket-brigade style across the gap. Hoisting bikes on his back, Ben carried one after another up the steep detour and handed it off. Brin lowered it into the washout and passed it to Anne who passed it to me. I lined up the bikes along the side of the road where they would await their riders. A couple visiting from Minnesota stopped to watch and the husband even stepped in to help in the bike passing. When all the bikes were across, we started heading up. I was able to pedal the final switchback, then crossed the cattle grate to where the van was waiting.

In case you're wondering what happened to Jon, when Brin returned from the top of the canyon to help us, he told me Jon had taken off to ride the road and requested that I make him a "respectable sandwich" for lunch. Okay... After making my own lunch and after everyone else made and ate their sandwiches, I put together a stack of meat, cheese, tomato and lettuce that he would love. Then we all piled into the van. All thirteen of our un-showered, tired bodies. A few miles down the road, we picked up Jon who had biked to where the dirt road met an intersection, then turned around. He was happy with his extra miles and even more happy that he was done climbing!

Plenty of people ride the White Rim in a single day, pedaling through some of the most beautiful canyon country in the Southwest. We took five days. I can't see myself wanting to ride it much faster than we did. I would miss so much.

Acknowledgments:
Thanks to Anne for instigating this unforgettable trip.
Thanks to Corinne for allowing me to use some of her photos here since I had none for this final day. They really add scale & perspective to the washout.
And, thanks to our guides, Brin & Ben from Holiday Expeditions. They were always helpful (even when Brin's estimate for the daily mileage was a little shy of what my odometer read) and kept the coffee flowing each morning. They also made sure nobody lost any weight on this trip (not sure if I should thank them for that). They now have nine places to stay if either of them ever decides to visit the Anchorage area! Of course, they'll have to bring their Dutch ovens...
Posted by bikegirl at 4:29 PM

Fun trip! The slower the better in canyon country, or you miss too much.

Hey Ladies! Karen from Holiday here. Just stumbled on to this blog. What a wonderful post. You guys were awesome! Looks like it was a fun trip. I'll be sure to pass this on to Ben & Brin. Thanks again and hope to see you back in UT soon!
Karen

PS. I agree with Ralph, the slower the better in canyon country!

Hi Karen! The day you posted I was putting together a slideshow of the trip to share w/the group as we try to decide where to go this year.

Glad you enjoyed the post (hope you read the series). It was a fantastic trip. And I agree, with both of you, I'm glad we took the time to explore the area instead of just blasting through. It gave us a real sense of being absorbed in the place.