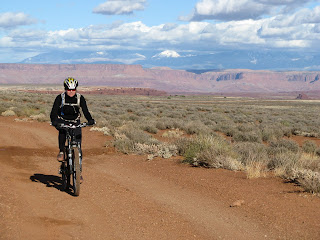 Elevation plays tricks on us. Here in Anchorage, we live among the mountains but at or darn near sea level. A trip to the Canyonlands takes us a few thousand feet above sea level where the air is less rich in oxygen, our legs feel a little heavier and the liquor will more quickly go to our heads. (There has to be some bonus.) Luckily, Jon and I had been riding at higher elevations for over a week before the White Rim trip started, so that made it a bit easier for us. Most of the gang, however had little time to acclimate. Still, after the first day, we all knew what to expect: the sun sets quickly in the desert leaving cold nights when it's clear; too many breaks for photos on the trail might leave people once again arriving at camp after dark; and we would be well fed.

The second day of riding gave us clouds and winds, but the rain stayed away all day as it did for the rest of the trip. It was as though Mother Nature had thrown all her tricks at us that first overnight and we had passed the test. We made light of the weather: it's prettier with clouds in the sky; people don't remember the perfect calm, clear days; they remember the challenges. One of my challenges was staying awake long enough to jot down a few notes in my notebook before my nose landed on the page and I was asleep. 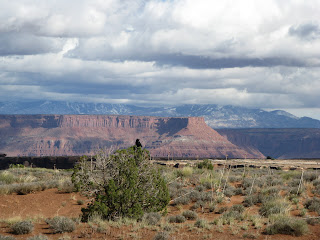 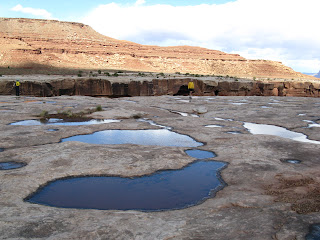 Pools on slickrock.
The rain from earlier in the day left puddles on the slickrock alongside the trail and it was more fun to walk among these pools than to huddle in the wind eating my lunch. A raven kept guard near the lunch site, waiting for food to blow from careless hands. Of course, we were careful to not leave anything to reward the bird and he kept his distance while we ate.

Our second camp was 21 miles from the first. White Crack is over a mile off the main road, near the rim of the canyon. We made camp, grabbed beers (maybe not it that order) then strolled off on a short hike to watch the sun set while Brin and Ben made dinner. That was a huge luxury: having someone else look after the cooking and cleaning. We had no shifts to work; no division of labor. Only set up and take down our own tents and get our gear to and from the van. 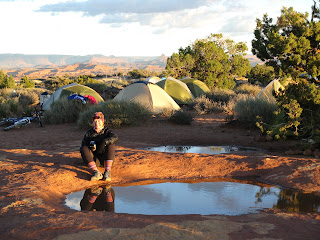 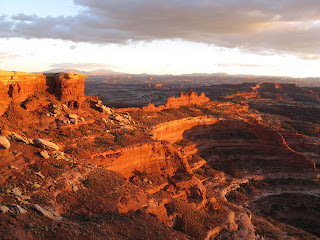 Just a few minutes' walk from Tent City. Sunset in the canyon.
Tomorrow, we'd be hiking into the canyon.
We had dinner around a fire pan as the stars came out. The moon rose over the canyon and I don't know who started it but we all began to howl, our cries rising into the cold, starry sky. Next morning, I was the first one up (besides Brin, maker of coffee) and I crossed the camp to a low rock overlook to await the sunrise. It glowed a piercing white before it was fully above the canyon wall, then the light began to soften and the coffee was ready. The rest of the gang began to stir. 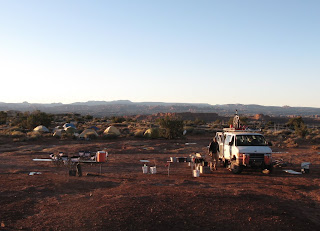 Sunrise at White Crack. All our gear, food & water
fit into this van. That's Brin making sure we all have
our coffee or water for tea.
This day would be a short ride; just nine miles to the next site. Brin knew of a hiking trail that starts at the top of the crack or gap in the white rock that gives "White Crack" campsite its name. We'd strolled right past it the night before without knowing a trail could take us alongside the canyon walls, to the bottom of the canyon and all the way to the Green River if we wanted. We'd decided the previous evening that after breakfast those who wanted could do a hike in the canyon, then we'd return to break down camp and have lunch before making our way to Murphy. 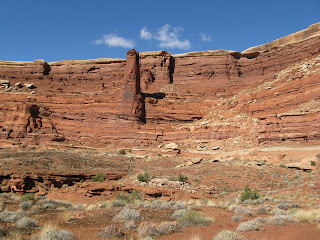 To get the scale, click to open this pic, then
look below the pinnacle to see the hikers. 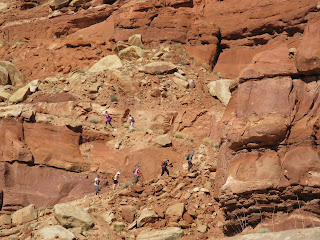 A great way to stretch your calves after all that biking.
I've heard and read in a few places that most people who do group trips on the White Rim do just 2 or 3 nights out camping. They probably aren't scheduling a night at White Crack or any time for side trips or the all-important hanging-out time at camp. Though I know we could have done the trip in one less day, having the hike and a short ride made the trip feel just a bit more relaxed, especially after the first two days.

Following the short bike ride, day 3 ended with an impossible (for me) climb up Murphy's, then the entire group at the top cheering Ben on as he drove the support van up the steep, narrow road. And for several in the group, Day 3 ended with a chilly shower the guides (aka "The Boys) set up at camp. 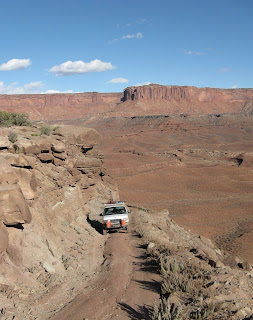 Go, Ben! Go! (We just want our beers!)
Here's a tip: careful opening your beer
after it's spent a day in the van! Phtzzz!

I, instead, opted for hanging out in my sarong and t-shirt atop a viewpoint rock that was the focal point of our campsite and where the guides had placed a handful of camp chairs. Brin gave me a boost to get up onto the rock. From there, we could watch the sunset, see a raven fly and imagine it was a hot summer evening. Of course, eventually I had to get off the perch and Jon helped me out by climbing down first then letting me ease my way down onto his shoulders. 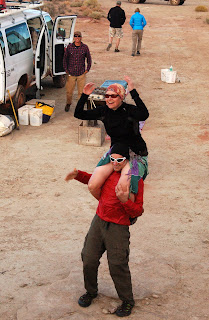 Corinne sent this photo of me
getting a shoulder ride from Jon!
We hovered over a huge bowl filled with guacamole, wary of a raven who was ready to swoop down if we were to all leave our post, then enjoyed dinner in our group circle. As the sky began to darken, we again looked to the starry, moonless sky, gazing at the constellations and the Milky Way. In the last hint of twilight, I could see a thin cloud layer draped like a puff of cotton over the snow-capped La Sal Mountains in the distance. It was the only cloud in the sky. It could be a cold night.
Posted by bikegirl at 9:15 PM

Some stunning scenery.
Seems you had a good time on a great trip

I skipped to your second post....now, for the beginning. all sounds good Rose! fun and beautiful. Katherine

Really liked the photo of Jon and the water pools. Beautiful!