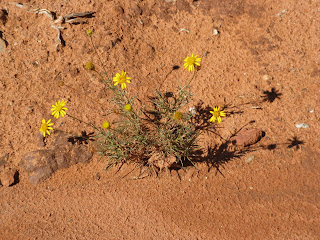 Part 3
I woke in the middle of the night at Murphy's and made my way to the outhouse. The nearly-full moon had risen, lighting the sky so much that all but the brightest starts and planets disappeared from view. I stood looking at the sky then returned to our tent. At around 2, I got up again and strolled toward the outhouse. I thought it would be a nice night for a walk, with the moon lighting the way. But Jon was asleep and I knew I needed sleep, too.

I should have gone walking because back in the tent I was restless. Maybe it was from eating too much guacamole or from the beans in the fajitas. Maybe it was the beers or the wine. Maybe it was the Gatorade. Whatever it was, I was wide awake and full of energy. And all I could think of were my parents. I remembered helping my mom sort through her dresser drawers before she moved. In that week after Dad's funeral, we "kids" kept ourselves occupied with the busywork of sorting and packing. It occurred to me, lying in my tent how we never just sat down together and cried. And how that would have been a very good thing to do. Instead, we kept things moving, organizing and being very practical about things. Leaving the room when we started to cry. Hiding instead of holding and consoling each other.

It's easy in the middle of the night, during the stillness around a camp to think about the bigger things, and that was what was going through my head. I recall now that one thing that had troubled me before my dad died this August was the fact that I'd had three back-country trips planned that would take me out of communication range for several days at a time. I'd worried that if something were to happen, I couldn't be reached. I'd even started writing a story about a funeral of a parent where the daughter hadn't been located so she missed it. Not even two weeks later, I got the call. When I'd visited in June and my siblings and I had talked with him about moving into an assisted apartment, he'd resisted and said, "In the fall. We'll talk about it in the fall." It makes me believe that he knew that his time was short but in his typical stoic fashion, he wasn't going to fill us in. He wanted to be home. Grieving is a long process and I was just beginning to learn that. It's also something that turns your relationships upside-down.

A few weeks after I'd returned from Wisconsin, I was listening to an interview with an author. He's maybe in his 40s or 50s. A few years ago, he'd lost a friend to suicide and it was then that he finally felt that he'd grown up. I understood what he was saying. For those of us without kids, the middle years offer the luxury of extending our own childhoods. We're responsible for ourselves only and that gives us lots of freedoms even as we work jobs, buy houses and establish relationships. We have free time and can afford to enjoy it. Then something happens. Finding out that Mom has Alzheimer's changed the way I talked to her and it changed the way I listened to her. I listen better; I encourage. I tell her that what she thinks or feels is normal and okay. It's intensified now that Dad is gone and I'm aware now of how much she needs me and each of my siblings and all the other people who are in her life. I have this new idea of what it is to be grown up: it's that knowledge that someone else not just depends on me but needs me. That's a huge responsibility. I didn't want to grow up.

My thoughts finally turned away from family and back to the trail, and I was able to recount the previous day: the hike, the ride, the evening surrounded by friends and the endless starry sky. I remembered that I'd packed some medicine that my doctor had recommended for my allergies that was designed for heartburn, took a dose and turned off my headlamp. 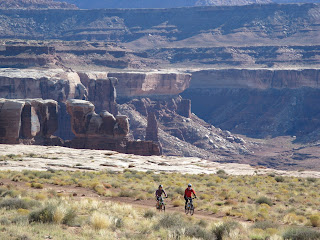 Lori and Anne
By the time I woke, the temperature had dropped to the low 30s and the wind had picked up. I was attuned to the roar of the stove heating water for coffee and, despite my lack of sleep, emerged from the tent. I tried to make conversation with a raven that was perched on our boulder. Instead of answering my throaty calls, it took flight and headed for the van. As it tried to land on the front wheel of Ben's bike, the wheel began to spin. Surprised, the raven flew off to the west as Brin and I watched, laughing. I quickly forgot about the long night as people emerged from their tents. We huddled with our hot drinks out of the wind, urging the sun to rise over the canyon, as we awaited our hot pancakes.

The day promised mostly gentle riding, except for a downhill to match the steepness of the climb from the day before as we now descended from Murphy's. The guides had proposed a short hike in a slot canyon that would leave from our lunch spot, but once there, decided it was too wet for hiking. Instead, we would ride a few more miles, then Brin would lead us up a cliff to an ancient granary that had been built around 800 years ago. 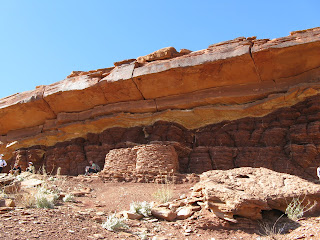 I'm writing our names in a logbook at the granary which dates
back to the 1200s. Thanks to Brin for sharing this place with us.
It was another sunny day (though cold), a great day for riding, gazing at the scenery and sprawling out on the warm rocks during the lunch break. The granary was in sight of the trail and just a short hike up a small canyon where it was built under an overhang. The walls were made of stone and the roof of tree branches. From the site, we could look down at the road where other cyclists rode by, unaware of the site we were exploring high above them. Back at the trail, we gathered our bikes and continued our ride. Soon we were descending, riding nearer to the river until reaching our camp in early afternoon. 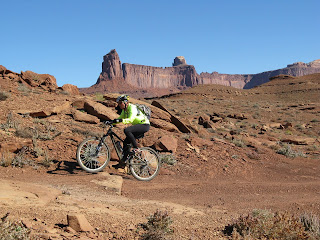 Sunny, but chilly ride.
Again we had the luxury of setting up camp in calm weather. While the guys went off to check out the river, we Divas hung out in camp - some of us again in our colorful sarongs - enjoying wine and the sun's rays, knowing that this was our last night on the trail and that the next day would bring some tough pushing. The next day would be Washout Day.
Posted by bikegirl at 2:04 PM

Rose, I enjoyed the parts of the story where you bared your soul a bit and talked about your feelings, your experience with your father's death, and how you and your siblings coped with it. I think we can all relate to those feelings.