and now, back to our regularly-scheduled bike posts... 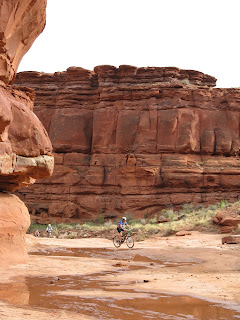 Day 1 on the White Rim.
It was in the works since last winter: a five-day fully-supported bike trip on the White Rim Trail in Island in the Sky district of Canyonlands NP, Utah. Ten women and four guys (two of the guys were our guides). Anne, our trip organizer, and a couple other women had done the trip last year. Their slide show compelled our little biking group to make the commitment to this fall's trip, but maps and photos can't begin to promise what will happen on the trail.

Especially this year. The year of the Mineral Switchbacks Washout. We found out in early September that a flash flood had caused the washout on the final climb that was to take us out of the canyon to the trailhead. The guide company presented alternatives: another trail, an out-and-back, a refund. Nope. We decided, we're doing the White Rim and if there's a way, we'll hike up the washout. As one Diva pointed out: it'll be an adventure. There's something to be said for doing something others have done, except under more adverse conditions. Maybe it's bragging rights. For me it's knowing that I've taken a tough route and come through it successfully. The bragging right is the internal one that says: you did that; now what else can you do?

Still, just when we thought we knew what to expect our first day, the plan changed before we even hopped on our bikes. Normally, people start the ride at an access trail called Shafer. But a day or two before our trip, a park truck had slid off the rain-slicked road and the Park Service closed the road. Nobody told us, though. So our van had to backtrack several miles then take us to a third trail, Potash Road, outside Moab to begin the ride. Believe me, the day we started the trip at Potash the thought crossed my mind that this was now the only open access point for our trip. I hoped nothing happened to close this road! 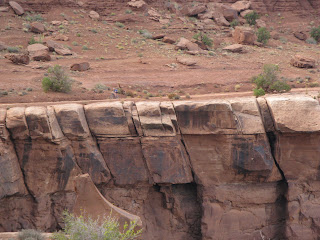 There's a biker somewhere...
That first 24 hours turned into the biggest challenge of the trip. A promised descent with a 20-mile ride to the first campsite became a 26-mile ride that started an hour late and with a climb. Some riders arrived at camp in the post-twilight darkness. Gear was distributed from the van, Brin & Ben made dinner as we scrambled to set up our cluster of tents in the Airport D campsite, fighting the evening wind that threatened to make kites of our little homes. But that was just the start of the wind. 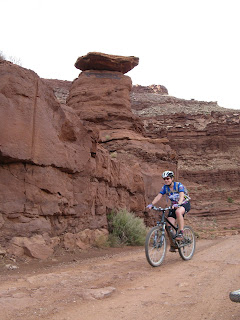 After Jon took this photo (I think) and put the camera away, a few of us stood talking with our guide, Brin, who had his back to the canyon. We all heard a sound like tumbling rocks just below us. Brin got a nervous look on his face and we all turned to look down the canyon. Suddenly, a ram with 3/4-curl horns scrambled up out of the canyon onto the road, not 20 feet away from us. The ram looked at us, crossed the road and climbed up an impossibly-steep, sheer rock then disappeared. We looked at each other in surprise at what we'd just seen. 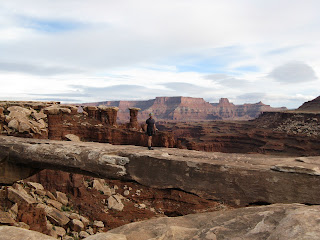 Jon on Musselman Arch, which I think should be
called Musselman Bridge.
Early in the morning the wind picked up. It blew the sides of the tents so fiercely that the walls hit our faces and campers braced to fight the fabric and claustrophobia. Fine desert dust had been blowing into the mesh walls of the tent for hours and the grit coated my lips, then my tongue as I inadvertently moistened my lips. Just as the wind seemed to be dying, the rain came. The wind returned with more power pushing the soaked tent walls one direction, then the other. I sponged up water with a towel. People stayed in their tents and waited. Then I heard some of the girls talking.

The rain let up. People emerged. Though I felt I had only slept a few hours, I didn't feel tired. Instead, I felt energized. Jon wanted to tell people that the rain was the best thing that had happened after the night of dust. We'd been in a similar storm two years earlier at the 24-hour race outside Moab. That dust storm lasted a day and when it was over we had sand dunes in our tent and the camera shutter refused to open or close properly. I'd finally given up and convinced Jon we should go into town & get a hotel room. To us, the rain was a welcome guest at the camp. It would put down the dust and clear the air. Besides, there was no going back to town. We had three more nights of camping. Our main hope was that that water wouldn't turn the trail to gumbo.

Near the outhouse a river of red-orange water flowed from a neighboring campsite, over the road, along the slickrock and finally poured over the cliff into the canyon below. I walked along its course and was impressed with how much water was flowing after what seemed to be a short storm, but when you're on a mostly rock surface, the water can't seep into the ground; it can only follow gravity.

During the lull after the rain, Brin and Ben got the coffee going and made our breakfast, Jon helped people with any bike issues they had and lubed chains. Everyone waited for the tents to dry before taking them down. It was just after breakfast, as the guys were cleaning up, that the hail came. Not huge hail, but it was cold and hard. Everyone dashed for their tents to again wait out the storm. It was a relatively short one and soon I heard the voices outside again: "there's a suckerhole." "Yep, I see another one."

Being a sucker for a suckerhole, I climbed out of the tent to study the sky. The day before the trip, I'd gone online and this was the only day for which the weather site had promised rain. I was going to take their word for it. I stood in the middle of the site with my arms outstretched as the sun began coming through. Though windy, it would be a good day to ride. A few at a time, riders left camp. By 12:15 I was pedaling away from Airport camp, bound for White Crack.
Posted by bikegirl at 6:30 PM

Rose, this is a great story! You posted it in November, but what time of year was the ride? I've been climbing just south of Moab in Indian Creek in May when big storms flooded the river...but hail??? Now I need to read the rest of the series.

Hi Ralph -
Thanks for reading. The trip was October 24 - 28, pretty late in the season & the last guided trip for the company that we were with.
The weather that night & morning was kind of crazy, but that's part of what makes it memorable.

Glad you're enjoying the story.
rose