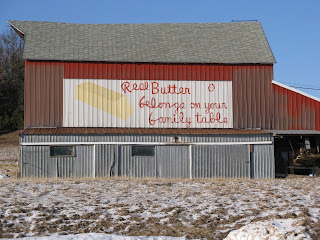 We've just returned from about a week in the Midwest, visiting family and driving around the countryside. I know when most people think of Wisconsin, they think of flat land, cheese hats and the Green Bay Packers. The part of Wisconsin where I grew up is known as the driftless region, an area that was not covered by glaciers of the last ice age. It's filled with rolling hills, meandering streams and bluffs that rise over the farm fields and towns. (I don't know anyone with a cheese hat but all the sports fans do cheer for the Packers.)

There are still lots of small farms in the area, some practicing sustainable, organic farming. Some have been bought by large corporate farms who work the land and rent out the old farm houses to locals (according to my brother). Still others have been purchased by Amish families who removed the electrical lines and indoor plumbing. They have their own schools and travel the network of roads in their trademark black, canopied horse-drawn buggies.

Whenever we go to Wisconsin, we visit the Carr Valley Cheese factory in LaValle where we get our favorite cheeses. They're made with milk from cows, goats and sheep. The older the better. This time we added another cheese store to our itinerary: Cedar Grove, where all the cow milk is rBGH free (no hormones). They also use goat milk. We even found some cheeses that had smoked salmon chunks mixed in. We asked one of the cheese makers the source of the salmon, not sure if they would be as conscientious about their salmon as they are about the milk source. Well, the salmon was Alaskan-caught wild salmon; no farmed salmon for them either. 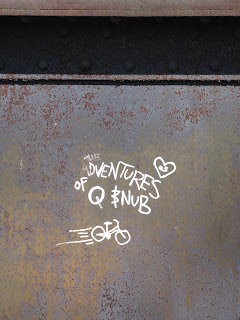 On a rail-trail bridge.
While there, we also took a little hike with my brother, Mike, on the outskirts of the town of Wonewoc. We started on the 400 Trail, a rail trail about a block from where Mike & his wife Pam live. (They are also our cheese guides.) We crossed the Baraboo River and hiked to the top of one of the bluffs. Not much snow; just a bit of crunchy snow on the grasses. A rare winter day without wind and with clear skies. It was good to be out stomping around by the river. That night, several inches of snow fell, covering our tracks and the rest of the landscape for miles. 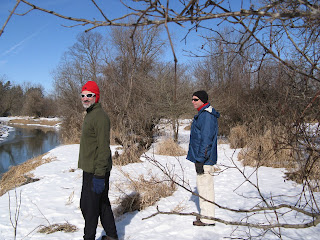 Jon & Mike stop along the river. (Looks like April in Alaska.)

Hey, and while we were there, my mom celebrated (though maybe that's not the word she uses) her 85th birthday. What better present than for me to come visit and bring Jon who loves to cook and made dinner almost every night we were there - except the night Mike made pizza. I think Jon gets the best son-in-law prize for this trip... except, during Scrabble he made two seven-letter words in a row. I don't know if Mom deducts points for that.

It was good to see my parents (Dad is 87!) and some of my sibs (Dave, Mark, Joanne, Bob), but it's always good to be back in Alaska where my friends are.
Posted by bikegirl at 10:00 PM

and it's good to have you home ... especially if you share the cheese