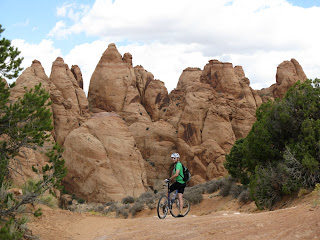 Jon waits for me to catch up.
Just days before we left for our vacation, Pete called to tell us he would be racing in the 24 Hours of Moab the next weekend. After little hesitation, we figured we'd head to Moab, Utah, to join him and check out this popular event.

We arrived on Thursday and checked in with his friend at Poison Spider bikes, got a few provisions and headed out to Behind the Rocks to camp. Other people had already started to arrive, so we found Pete's spot (reserved by a friend) and pitched our tent. The wind had already begun, but we weren't too concerned.

Next day, we biked the 15-mile course to see what the racers were in for. It wasn't bad on the trail, but at the camping area the wind continued. Back in town, we met Pete for dinner, then it was back to the race course where the wind quieted, then resumed with full force in the night. In the morning, it wasn't letting up. Tents were flapping, the wind forcing them to tug at their stakes. Bandanas and Buffs covered faces. Dust settled on our teeth. Trucks sprayed water on the ground. 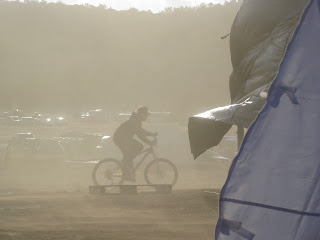 The wind did die down now and then, but it didn't stay calm for long... 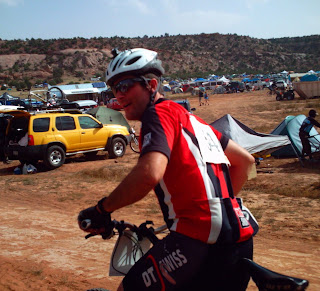 Pete after the first lap. 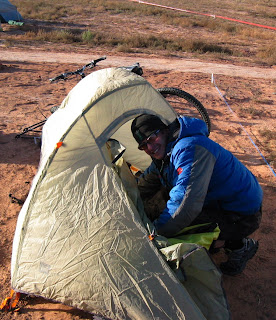 Cullen (Pete's friend) biked to the race pulling all his equipment,
including a back-up bike, in a BOB trailer.
He's doing the race as self-supported as possible.

Which is worse: the wind or the rain? Even considering my whining about the rain this past summer, I guess I'd take the cool rain over the hot, dust-filled wind. A soaked tent or a tent filled with dust? 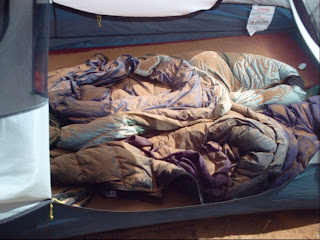 Don't try to tell me one is worse than the other - they both are miserable, just in different ways. Tonight, we decided to not suffer - we found one of the few vacancies in town. I'm not eating dust tonight.
Posted by bikegirl at 8:09 PM

You had wind there and missed the BIG wind here. 100 mph gusts higher on the Hillside. We've got a 40' spruce tree leaning over the hot tub and house. The tree guys are too busy cutting trees off houses to get our leaner yet.

Despite the wind, sounds like you're having fun. That sand riding will be good practice for the snow that has been falling since you left. Not a ton of accumulation yet but soon if this keeps up.

I heard about that! I saw that some trees fell over the new STA trails & they're running the chainsaws to clear them off before too much snow falls. I think there's another work party this weekend...

Guess nothing fell on our house or I would have heard from the house sitters. And yes, we are having fun. It's all part of the big adventure.