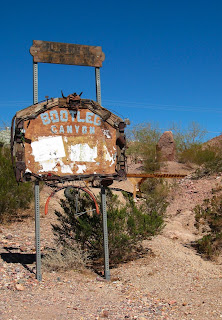 On Wednesday, just a day after hitting the ground in Las Vegas, Jon and I were riding singletrack in the 90-degree sun at Bootleg Canyon, just outside Boulder City, Nev. It always takes time for me to acclimate to the heat on a vacation. Even more this year. As I slowly made some hills, or chickened out on some minor rock sections, I reminded myself that the first ride in the desert is always the toughest.

There are a few things to remember - like the fact that the rocks and roots won't be slippery, and that riding in sand is much like biking in snow. And that just because you don't perceive that you're sweating doesn't mean you shouldn't continue to hydrate.

I was done riding after a few hours, but Jon opted for one more loop while I strolled around checking out the terrain. Within an hour he returned, telling me I had to get back on my bike to do a section he'd just pedaled. "There's another parking lot," he told me. "I'll pick you up at the bottom."

So, back on with the shorts, and with map and pump in my water pack, I took off. After a bit of climbing, the trail started to descend. The singletrack curved and rolled through the dry terrain. The afternoon heat had picked up, but I was cooled by my descent. Eventually, I saw the car and Jon greeted me with music and an open beer. Next stop: Lake Mead for a swim. What a way to finish the first ride!
Posted by bikegirl at 6:49 PM

that sign is wonderful!!
-
nice blog <3 ill be stoppingg by often