This winter I decided to build up a single speed from a frame. It's a steel castoff that looked like it might have potential. Potential for taking up some time. After cutting off the cables & housing, I went after the cranks & bottom bracket. That's where it took lots of power by one of the guys at the shop and a pry bar to break loose the years of rust that had built up on the bike.

Even the kickstand bolt was rusted in place! 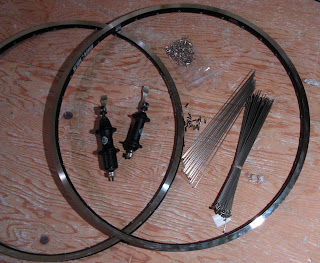 I had a couple old hubs salvaged from the bin of destroyed wheels and a used single-speed converter from one of the guys. I only had to order a couple parts - the funky handlebar and the right size seatpost.

After building the wheels for my Pugsley last fall, I was pretty excited about building another set. With some new rims & spokes and Jon's coaching, we each started lacing a hub to a new rim - Over two, under one, tighten a couple turns, repeat. That was Sunday night. 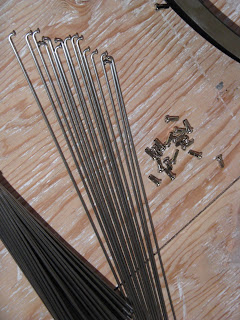 Last night I spent a bit of time at the truing stand twisting the spoke wrench to pull the rim a little more one direction, taking out the wobbles and hops. Jon finished one of them. I'm almost ready with the other.


I've seen machines build wheels. They're pretty fast and very precise. But I like the process of connecting two circles with what are really just very thick wires, and knowing they will then allow me to roll all over town. That's pretty cool. 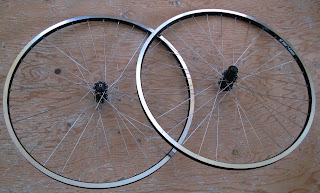 That is very cool, and your wheels look great. We're on the hunt for hubs, I'm excited to build my first wheelset.

Enjoying your blog, thanks!