bike lanes, then over the river & through the woods 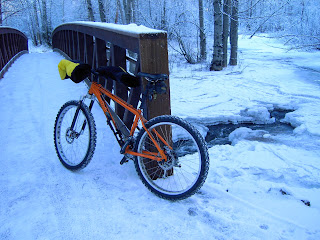 I got at email from a local bike advocate to show up for a ribbon cutting this morning. The new Elmore Road - formerly know as the Bragaw-Abbott Loop Connection, among other monikers - was officially being opened to vehicle traffic. The road that connects Tudor and Abbott roads has in-street bike lanes on both sides and we planned to represent commuting cyclists on this opening day. Of course, cyclists have been using the route for a few months during various phases of construction and while awaiting the installation of stoplights. So, while the route isn't as new to commuting cyclists, we still wanted to be represented.

I rode the couple miles from my house in 10-degree temps, along the snow storage easement... I mean bike path... along Tudor Road. The jumbled slush that had been thrown by the plows onto the path made for a bit of a rough ride. At Elmore, ice melt must have been placed on the roadway to melt away some of the snow and ice. Cars were parked in two columns, as if abandoned, on the new roadway. No room for me in the bike lane, I rode between the empty cars to the sight of the ceremony. Found the other cyclist - it only takes two people to start a movement, right?

John W. & I made our way to the front of the group, next to television cameras, to watch officials declare the road "open." It took about a half-hour for all the talk to end and the ribbon to be cut into segments to commemorate the new roadway. We waited a bit, then were the first to "drive" the road.

I wonder: do we really think that more roads will mean people will drive less? Certainly this connection will cut a couple miles out of my drive to visit friends on the Hillside, but I don't know that a shorter commute for people means they won't just drive more often or drive farther to do something else. My wish is that this addition of a road with bike lanes and a recreational path will mean more bike commuters. Prove me right, Anchorage!

After riding the new section of road, John & I parted at the BLM. I pointed out the new Lynx Trail to him then made my way back through the park toward the Campbell Creek. This is my commute and I'll take this anytime I can instead of riding on the streetside paths. Give me the woods, the overflowing ice on the creek, the muffled traffic sound and the view of the mountains that's not filtered by vehicle exhaust. 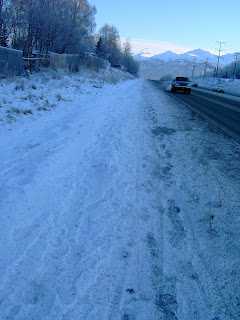