We made a fairly quick drive from Lespignan to Orleans, about an hour south of Paris and checked into the micro-hotel room (seriously, the place was so tiny that there was no space between the bed and the wall to pass one-another; the room fit three only because of an upper bunk) then took off for the city center. People who know about Orleans will know that it's the city that was liberated by Joan of Arc during the Hundred Years' War. Yeah, I didn't know either.

Before we arrived at the cathedral, we came upon a courtyard where art was displayed under the many arches of a covered passageway. The public art was a wonderful treat. I felt like we'd stumbled upon something that most people had passed by. It reminded me of my artist friends in Anchorage and around the country, all the creative energy filling the spaces. It was here I most wished to have an interpreter to understand the nuances of each piece and the possible message they were trying to convey.

That evening, we made our plans for the next day in Paris. I anticipated it with excitement and a little sadness that our journey would be done. Though, I admit, it would be good to get home and be in one place for a few weeks.

We arrived early the next day at our hotel just outside Paris, from which we took public transit into the city. Destination: Eiffel Tower. We climbed the 360 stairs to the first viewing deck, and after a look around, climbed another 360 stairs second deck. The day was sunny, though a bit hazy, yet we had views of so many landmarks of the city. Arc de Triomphe, Notre-Dame, the Louvre. We could map our course from the deck. We took in the views in all directions before finally heading for the stairs to return to ground level. 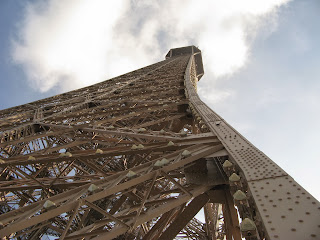 Many of the museums were closed that day, a Monday, which was probably for the best because with so much to see on a sunny day, I would have been torn between being outdoors and spending hours in the Louvre or the Musée d'Orsay

Instead of spending time indoors, except for meals, we wandered the city, visited the Arc de Triomphe, walked along the Champs-Élysées and went on a brief wild goose chase to find a fabric store that didn't exist (though I found some wonderful striped tights in a sock shop). We ate and drank inside small cafes when we realized that the smoking ban only applies to indoor dining and the sidewalk cafes were choked with cigarette smoke and exhaust. (I forgot to mention that the restaurant in Lespignan had a mildew smell which had set off my sinuses. Once in Paris, the vehicle exhaust and cigarette smoke irritated my nose even more. I developed some pretty bad sneezing when I was near smokers of which Paris has more than its share. I was kind of bummed to sit indoors to have lunch or a coffee, but it was the only way to keep from sneezing through a meal.)

At sunset, we walked the grounds of the Louvre, then made our way across a couple bridges to reach Notre-Dame where a musician was playing and singing for the gathered crowd. Barges filled with tourists and revelers plied the Seine. The tourists snapped photos of us and we snapped photos of them. We stopped by Shakespeare and Co. and browsed through the shelves of the tiny but busy bookshop. With hunger setting in, Jon encouraged us to stop at a small cafe we had walked past earlier.
We stepped into Quay 21, a quirky place on the Left Bank, near Notre-Dame. It was almost empty of customers, which can be a bad sign or a very good sign. The owner greeted us and learned which language to use with us, then helped us understand the menu. He spoke at least three languages and when we found out he was originally from Latvia, he and Janis slipped into Russian and it was as though we were now part of the family. Near the end our meal - one of the best of our trip - Janis was about to take a photo of Jon and me. The owner grabbed Jon's camera from Janis's hand and snapped a couple pics. Everything about the experience made Quay 21 the best possible place to end our trip and our day in Paris. All we had to do was find the transit station and take the train back to our hotel.

The next day, we would be on a jet back to the U.S., by way of Iceland; and Janis would be crossing the English Chanel, returning to London for a few more weeks before driving back to Latvia. In less than a week's time, I would start checking on fares, wondering how soon I can get back to Europe.