a few days in france

Europe Trip, Part 9
We were walking along the twisting, cobbled streets of Arles looking for a place to have lunch. "That looks good," Jon said, gesturing toward a diner's plate. "It is good," she said. We stopped. She was sitting alone at the sidewalk table. I asked if we could join her for lunch. "It's been two weeks since I've spoken full sentences with another woman!" I said. It was a strange realization. Traveling with two guys through countries where each word spoken to a stranger was a challenge, I didn't use many to talk with other people. It was a sensory deprivation of sorts. Jon and Janis had their guy talk, and while I enjoy their company, I really missed having one of my girlfriends to hang out with!

We sat at the table and introduced ourselves. Shirley was a software developer from Israel. When Janis said he was from Latvia, she told us she is of Lithuanian descent. (Lithuania is between Latvia and Poland so we'd spent a few hours driving through the small country.) She was on a daytrip from Avignon, having traveled the short distance by train. She told us that traveling solo after a friend had backed out of the trip gave her an opportunity to improve her French. I envied her that she had a few weeks to explore France while we were just arriving with little time to soak it in. After we parted, I continued searching for my idea of Provence, of van Gogh, of the places that make Arles such an attraction.

I've admitted before that I love fashion, though am not usually very fashionable. Working in a bike shop means knowing that whatever I wear could get grease-stained or snagged, so I tend to wear t-shirts and jeans or shorts most of the time. I saw an adorable skirt on a mannequin outside a shop. I had to go in and see what else they had. The racks were filled with skirts and blouses in beautiful patterns and colors. Jon pointed to the back of the store where a woman sat at a sewing machine; an assistant stood nearby. I tried on the skirt, then a different one. Soon, the woman was wrapping a blouse around me, tying the lace ties. I felt fabulous. I could have spent an hour in the tiny shop, but I made my purchases and left happy. Something unique. Something handmade by the designer right there in Arles! 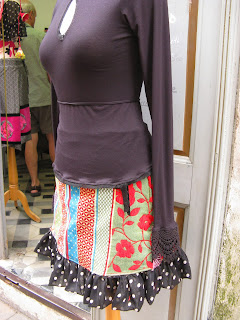 We walked around the Roman theater and arena, ducked into a few more shops selling textiles and ceramics, then wound our way back to the other side of the Rhone River, where the car was parked. We were soon on the road trying to reach Lespignan before dark.
The narrow, twisty one-way streets of the old part of Lespignan almost did us in as Janis and I tried to navigate Jon to the house. We missed one turn and ended up climbing a hill. We knew we were very close, we just couldn't quite figure it out. I got out of the car to try to walk the route... and to see if we would even be able to drive the car around a corner and between the buildings without scraping the sides of the car. We could see where plenty of drivers before us had failed. Jon made the tricky corner and drove down to an intersection. I started walking up a hill and that's when I saw Pierre. He was standing at the intersection uphill from me, waving us onward!
If you have ever driven in any foreign countries that have these single-lane streets that were designed for walking and maybe a narrow wagon, you will appreciate just how frustrating it can be to squeeze a car around a corner. I have a new appreciation for our two-lane streets and well-signed intersections, however I must confess the tiny village streets were very appealing for the sense of revelation we experienced rounding each bend. I would prefer to experience them on foot or even bicycle.

That evening, we went to one of the local restaurants (there are two, and one pizza take-out place). We shared tales of adventures and caught up on what Pierre and Cheryl have been doing since returning to France last year. Pierre and Janis had lots to talk about, especially when it came to bike tools and how they could be made better.

The next day, we all went together to a couple of towns: Aigues-Morte and La Grande-Motte for sight-seeing before returning home in a downpour that almost washed the streets clean back in Lespignan. By "almost" I'm referring to the dog poop on the cobbles which pet owners for some reason don't pick up. Gave a different meaning to the term, "watch your step."


The following day, while Pierre and Cheryl visited friends in another town, Jon, Janis and I set out to walk to the coast. What I didn't know was that when Pierre told Janis the directions, he made it sound like it was about five kilometers away. It was not.

It was a clear, beautiful day. But, eventually the joy of walking past vineyards and fig trees degraded into somewhat of a death march. Don't get me wrong; I enjoy a good hike. But this was to be an afternoon outing, 5k each way. None of us had planned for such a long walk, or the wrong turn that dead-ended at a no-trespassing sign. We were quickly going through what little food we had packed (at least we'd stopped in a local shop for some cheese before starting). After a few hours, there was nothing I wanted to do more than just sit in one place and watch the world go by. I wanted things to be stilled. Instead, I became frustrated.

When we reached a bridge over a river and there was no sea nor beach in sight, Janis volunteered to run to the house to get the car. Jon and I also turned around. We watched cyclists ride past at their Sunday pace and wished for bicycles; we tried to hitchhike and watched as full cars drove past, the drivers shrugging their shoulders in apology. I kicked myself for not having studied a map before leaving the house. It was not the day I had wanted.

We were almost halfway back to town when Janis arrived with the car. We all agreed that after having walked so far, we should at least drive to the seashore. When we finally arrived, we knew we'd made the right decision to get the car. We walked along the sand beach as waves roared in, too rough and chilly for us to swim. We looked at sea shells and weathered glass that formed a jumbled band of debris along the beach. I tried to relax and enjoy being in that place. To watch other people. I tried to put the long walk in perspective. I guess I was done with the pace, done taking wrong turns and done with long days. I was mentally and physically exhausted. I cooled my feet in the wet sand, let waves wash over my feet and ankles. Jon tried to get me to smile. Finally, we were ready to return to the house and, even more important, have some dinner.
Up the hill from the house was a restaurant we'd seen that first night when we were trying to find the house. It looked pretty fancy. I put on my new blouse and we arrived just as they were opening. Neither the waitress or the chef spoke much English so we went down the menu ordering a different starter each and a different main course for each, unsure of what would arrive on our plates. We shared a bottle of wine and the relaxation began. That's the beauty of sharing a meal and a bottle after a rough day. The edges wear down; we can laugh at our miscalculations; we can take note of how far we've traveled - not just that day, but since leaving London. We know we will remember our walk toward the sea for a long time!

As we were finishing our meal, Pierre showed up at the restaurant. He and Cheryl had arrived home and he wanted to see how we liked the restaurant. The food was fantastic (though since I didn't write it down, I'm not sure what everyone had. I had enormous prawns and remember that they were great. The next morning, we would leave Lespignan and our friends for the long drive to Paris. Our adventure was coming to a close.