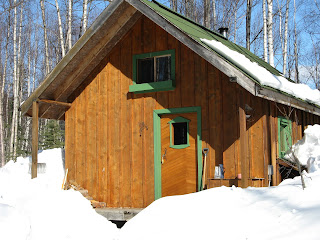 Little cabin in the woods. I love the design Paul came up with for the door.
Sometimes, a girl just needs a change of scenery. I spent a bluebird day inside on Saturday, compelled to work on the novel, promising myself I'd get out on Sunday to reward my hard work and the resulting 2,400 words. I figured I'd email my friend Jo-Ann and see if she had plans. But before I sent her a message, one from her appeared in my inbox: would I like to go to Talkeetna (just over 100 miles away) to meet our friend, go snowshoeing, maybe have dinner? I called immediately. Yes! Let's go.

So on Sunday morning we met at my house and loaded our gear into my car. I wanted to do the driving, especially since I'm not going to be able to drive in a few weeks and I actually enjoy driving. The sun's light was intensified by the snow that surrounded us as we headed north. Just after the Knik River bridge the highway was bordered by frost-covered trees while the Talkeetna Mountains spread out before us. After passing through Wasilla and Houston, we started getting views of the mountain. THE mountain, Denali. Sometimes I forget how stunning the view of our tall mountain is when it looms in the distance. And there it was, lit by the sun, with wisps of clouds hovering on its flanks. It came into view several times during the drive, then would just as quickly disappear behind the trees.

After a stop in downtown Talkeetna where we got a little something to eat at the Roadhouse, we doubled back to meet our friend, Corinne, at her cabin. She gave us the tour along the path that had been carved through the waist-deep snow from driveway to cabin, past the woodshed to outhouse. Corinne showed us on the map where we would go. We would follow a route that had been snowshoed by Corinne, her husband and a few neighbors this winter. There are no official trails but she suggested we could wander over a series of lakes and wetlands. 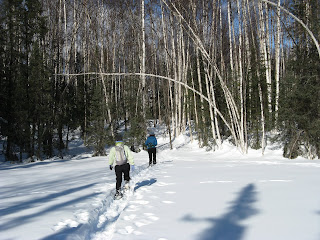 Jo-Ann and Corinne.
Between the lakes were low hills covered with birch and a scattering of spruce trees. This area is off-limits to motorized use so we had the quiet you don't often find on trails this close to the roads in the Valley. Where nobody had recently snowshoed or skied, we took turns breaking trail, making note of animal tracks and beaver lodges. While crossing one of the numbered lakes, I looked over my shoulder and saw the summit of Denali. At the far side of the lake, the long expanse between us and the distant trees afforded a view of the mountains that people travel thousands of miles to see. 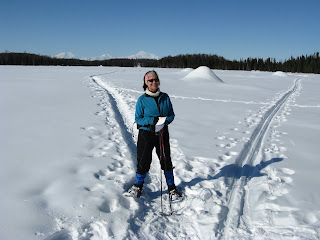 With beaver lodges and mountains. 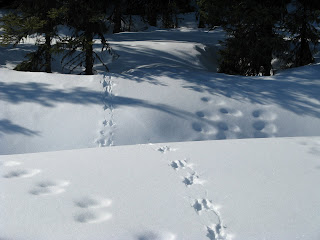 Tracks.
Our legs felt the effects of the high trail-breaking steps and the weight of the snow which, warmed by the sun, was clumping to the bottoms of our snowshoes. The air was clear and warm. A light breeze sometimes hit our bare faces. Time slipped by unnoticed. Upon returning to the cabin, we sat on the front steps sharing snacks and hot tea. I could have stayed another day. I could have stayed a week.
Posted by bikegirl at 9:00 PM

i love the tracks photo!