When we last left our story, I had completed a 5-day organized trip in the Canyonlands/Maze area of Utah. The last day is always the toughest as I hate for such adventures to end...

After the five-day organized trip ended, most of the group headed into town (Green River) to Ray's for a burger and a few pitchers of cold brew. Nothing like a bacon cheeseburger after a few days on the trail, not that the guys didn't feed us well. Believe me, we were never wanting for food or beverage. But sitting at a table after having showered and put on a dress to show off my new tan (it wasn't just dirt) made me feel pretty darn special.

The next day, Lori, Bev and I bid farewell to our friends, got a few items in Green River (including some luscious melons) and hit the road, heading south toward Moab. We made a side trip into Arches where a half-hour hike turned into a nearly two-hour adventure (I don't know how that happens) to Delicate Arch. We visited a few more arches before retreating to the car and driving to Moab to get food for the next few nights of camping out. 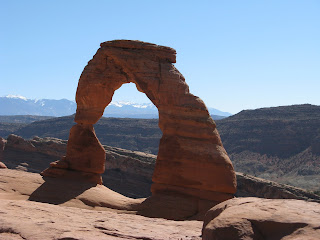 A rare moment when the arch isn't overwhelmed
with a bunch of tourists, Divas included! 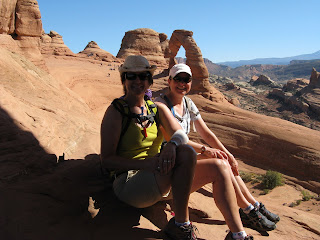 Lori and I pose inside one formation with Delicate Arch in the background.
Heading south, we noticed some deer crossing signs and had our eyes peeled, but the first time I spotted one, standing sideways in the middle of the highway, I slammed on the brakes and we were all a bit stunned. After the deer left the roadway, I saw three or four more waiting in the ditch next to the guardrail. We would have to be vigilant. We'd spot a deer, slow down and hope for no collisions.

In Blanding, a closed visitor center had us a bit worried since we hadn't yet figured out where to camp, but outside the restroom Lori found a brochure with a list of sites. Could we make it before dark? Luckily we could and we did, watching for deer the entire time! 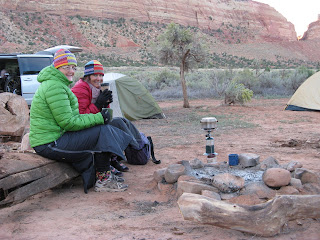 It took a long time for the sun to peek over the canyon wall.
Bev and Lori enjoy coffee at Comb Wash.
The next morning, after coffee and a little something to eat, we hit the road once again. Just a few miles onto a two-lane road through grazing land, we came up a rise and in front of us was the largest elk I've ever seen. (Come to think of it, I've only seen elk from far in the distance.) He stood sideways in the center of the road looking at us as I again slammed on the brakes and all our gear slid forward in the car. Now we were awake! He strolled off the road and I began to accelerate, but it took a few minutes before our adrenaline had settled down. Soon, we were at the switchbacks in the road that would lead to Mexican Hat and which provided vistas for miles to the south. We could see as far away as Monument Valley. 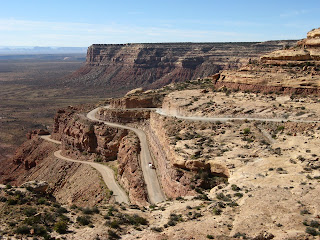 Not as narrow as it initially looked.
I chatted with a few geologists who were making sketches at one of the switchbacks. Students? Turns out they were working for an oil company studying the layers of the rock formation because it resembles a formation that is submerged in the ocean and is a prospect for drilling. Interesting.

Moving along, we skipped a canyon hike in Page in favor of getting closer to Zion so we could spend the next day there. We did stop in Kanab for camping information and to have dinner at Nedra's Too, a little Mexican place which had outdoor seating and wifi. My, how times have changed since Jon and I first rolled into that town over 10 years ago. Of course I wished we had more time to check out the town, but we needed to find our campsite.

When we reached the campground at Coral Pink Sand Dunes we learned it was full! Now what? I asked the ranger if there was anything else nearby. He gave directions and sure enough we had passed a small dry campground (no water available) on the way to that one. We quickly set up our tents in the fading light then Lori and Bev gathered enough wood for a small fire where we could toast our final night of camping.

The moon had yet to rise and the stars shone through the clear skies as the temperature dropped. We made plans for an early start and retired to our tents. I jotted down some notes, then read for awhile, but it seems I had a very good sleep that night, one of my best sleeps of the entire trip, but that's another story. The next day, we would drive the tunnel into Zion, spend the afternoon in the park then head south for our final night. 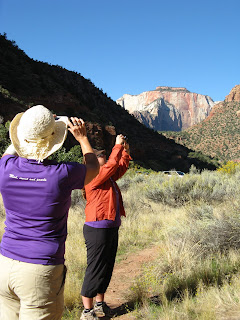 After driving through the tunnel into Zion, Lori & Bev snap photos.
The thing about Zion. Zion was crowded. Maybe not by summer or Lower-48 standards, but for me it was crowded. The shuttle buses taking us up the road to the short hiking trails were nearly full . We chose a hike to some pools. It was a rocky trail, a slightly challenging hike for people who don't hike at all, but pretty easy for us. But when we got to the pools, they were noisy with families and children yelling. I don't know what I expected, but our destination was not a peaceful respite.

Continuing our thru-hike, we stopped off the side of the trail for a little lunch then took a little side trip on a trail that soon dead-ended. 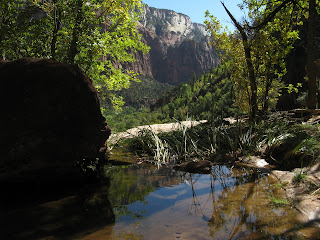 After our lunch we detoured onto a trail that dead-ended due to a
washout. Nobody was there. The pond drained over the ledge... 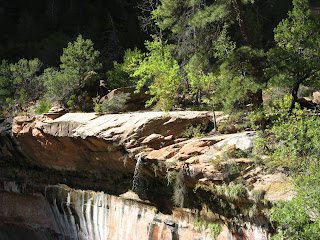 I could have stayed there for some time. Returning to the main trail, we found that the second half of the route was paved! That would explain the baby strollers I'd seen! No wonder there were so many people - the route was set up to make it accessible to almost anyone. Which is actually a beautiful thing: families and elderly grandparents enjoying an outing; it was quite unexpected. But I could have gone for a less-traveled route where there would have been room to relax in quiet contemplation. Not something you'll get on the developed trails. 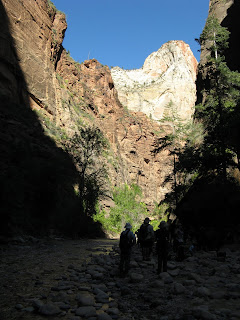 Into a canyon with lots of other hikers.
But I did enjoy the sun and the heat and sitting on a green lawn at the visitors' center. Another hike in a canyon followed by a bus ride back to the parking lot and we were ready again to hit the road, driving through Hurricane and hopping on the interstate, navigating through Las Vegas until finally we reached Boulder City. I'm a creature of habit: when I find something I like, I keep going back. Pulling into the parking lot at El Rancho was one step from being home.

The room at El Rancho had plenty of space to spread out. Before we did anything else, we packed our bikes back into their boxes for the next day's flight. I was tired and hungry and irritable. I didn't know what I wanted to do next: dip in the pool, eat dinner, crash? So I took a walk. I walked toward downtown where cafes have sidewalk seating. It's a town Jon and I have visited several times as we've begun or completed vacations in the southwest. I took a seat in front of a breakfast cafe, melting in the 90 degree heat even though it was after 8pm. I wasn't just tired and hungry; I missed Jon and I was ready to go home.

Back at the hotel, Bev and I ordered food from a local restaurant. When it arrived, I looked at it and wondered why I'd ordered so much. The kabobs and rice also came with a huge salad. Plus the woman at the restaurant had talked me into the key lime cheesecake. I'd set up my Thermarest on the floor near the unused tv and Bev and I ate while Lori hung out at the pool. Bev finished her meal and I was still at it. Lori came and went. I ate half the dessert, thinking maybe I'd share it with Lori. It was not to be. I devoured it!

I guess I sometimes forget how much I travel on my stomach, Jon never lets me go so long without eating. I'd better tell my friends that if they want to keep me from getting cranky, they'd better keep sending the food my way.

I've had over a week to reflect on this trip, to consider the bike riding, the hikes, the road-tripping. It's great fun to take a trip like this with the girls, but there's still nobody I'd rather travel with than Jon. Even though he drives me crazy in the same ways I probably drove my friends crazy (such as not knowing where we'd spend the night until we're pitching our tents). Guess I didn't realize how alike we've become in our travel styles. Or maybe I was like that all along.
Posted by bikegirl at 8:14 PM

Hey Rose, Nice to see you in Moab and have enjoyed reading of your adventures here (great pictures). I too have adopted a very fluid traveling style and just ‘go with it’, could be the reason I travel alone 95% of the time, it just works better.
Being a big proponent of our National Parks I have visited Zion almost a dozen times and will again, I can relate to your experience there. The same scenario exists in Yosemite and several other more popular and easily accessible parks. It is what it is and Ive learned to just enjoy it and realize there are reasons so many people are there, they are some pretty cool places to be. Im not sure if I can post a link here, but you may like ‘Challenges of Angles Landing’ over on my blog.
See you on the trail.

I just discovered your blog and am really enjoying your amazing photos and stories. Great blog!

Hi, I came across your site and wasn’t able to get an email address to contact you. Would you please consider adding a link to my website on your page. Please email me back.