After the sun set last night and the sky grew clear and star-filled, the temperatures dropped below freezing. Before going to bed, I hoped that today would be a good day to ride the Kincaid Park singletracks. When I biked the new trails last Saturday, the ground was beginning to thaw creating slick spots where the moisture couldn't seep farther into the freezing ground. In a few places, ruts had begun to develop from all the tires hitting the trails during the recent wet days we've had here in Anchorage.

This morning, the temperatures across town had dropped from the 40s into the 20s, freeze-drying the muddy ground into a crunchy, crumbly surface. I brushed the dried dirt off my bike, lubed the chain and loaded the bike in the car to head out to the park. 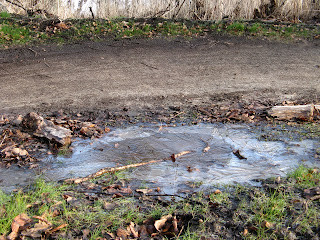 Ice next to the trail - ride those banked turns!

In the past few years, I hadn't done much riding at Kincaid. The park is across town and the trails hadn't been all that interesting to bike. We have great riding on the east side on trails that begin just two miles from my front door. No need to drive; just ride up the road and I'm on the trails. But I helped work on the new trails and I wanted to have a chance to ride every inch of them before the snow flies. I know the snow could land in town any day.

For today's ride, I rode the main loop counter-clockwise, the opposite direction from what I'd done the last couple times. I also rode for the first time a small loop that wasn't complete before I left on vacation earlier in the month. (It's the section on the bottom left of the network that looks like a little animal). On that loop, I criss-crossed or rode next to the wider ski trails a few times, probably causing a little puzzlement on the part of two walkers who I encountered at least four times.

With all the twists and turns, the rolling climbs and descents, the mountain views and the intimate feeling while riding among stands of birch, I couldn't help but smile. I thought about all the people who came out to volunteer to build the trails; people who sacrificed their own riding to help bring  better riding to everyone in Anchorage. The numbers are impressive. We had 241 different people volunteer - many of them more than once - for 20 work sessions. Kids, adults, cyclists, runners. People from organized clubs (including the Dirt Divas) and people who just felt like they wanted to be a part of making this happen. Pretty cool people making some sweet trails! I'm glad I can be a part of it. 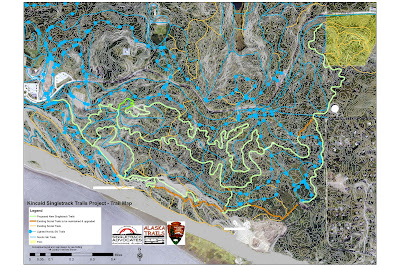 Here's a map I got from Lee Bolling, one of the idea guys behind
this project. It'll give you an idea of what we have. The new trails
are in light yellowish-tan.
Posted by bikegirl at 6:16 PM