encounters: on the mountain bike 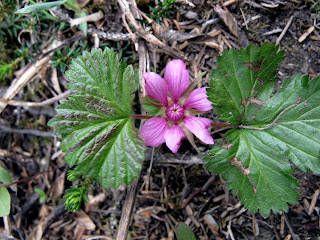 Small flower alongside the trail. Now, where is my wildflower guide?
I'm researching a project this summer, that is, if the weather cooperates enough for me to spend hours on some longer trails in the state. When I wrote my trail guide for Anchorage, I spent hours in the woods, biking alone, carefully taking notes to describe the trails. I noted where to turn and where a rider would end up if they took an alternate route; pointed out viewpoints and interesting geologic features. Stopping to take notes took lots of time... and lots of bug dope. It was so tedious that I told people who offered to ride with me that they wouldn't have any fun because I stopped so much.

This year, I'm trying a new tool: a voice recorder. I took it out for a test run on the local trails last weekend. Then on Monday I took it on a ride with friends on Russian Lakes Trail. Instead of stopping and pulling out the notebook (which I did bring as a back-up) whenever we arrived at a campsite or bridge, I'd just look at my odometer, hit "record" and make a comment: "Mile 9.4 lake comes into view on left." Simple things like that. After a while, I just left the recorder on. Listening to it on a rainy afternoon, I began noticing all the other sounds I had recorded.

The whoops of the other riders when they went through a dip or rode through a sweeping section of trail. Calls of "Hey, bear!" as we made our presence known to the locals or "scat!" as we counted out how many piles of bear scat we passed. We lost track pretty quickly, by the way.

I was surprised by the loud sounds my tires made as I rode through sections of loose, water-sculpted shale. Sometimes I could hear a branch that had plunked against a spoke or two, sending its resonating tune to the recorder. I heard water rushing under bridges, my tires rolling over the planks. I heard disc brakes squawk before a short, steep descent and tires sploosh into a mud hole that was deeper than expected. 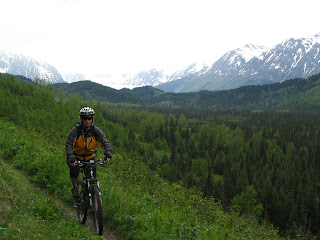 Anne in a wildflower meadow.
Listening to the recording, I heard birds and remembered how lively they sounded as I slowed to hear them in the trees. I am reminded of the spruce-sawdust smell where a downed tree had been cut and removed from the trail. I recall a moment when the sun emerged through the clouds and warmed my legs. I hear rain falling on the sprawling pushki leaves. I hear my own breathing on climbs, the clicks of my shifters then the rush of wind generated when I descend.

I can recall the purple lupine alongside the trail, meadows filled with flowers that were in or on their way to full-bloom: chocolate lilies, forget-me-nots, wild geranium, wild rose and more lupine. I've biked this trail a few times before, but never with this level of awareness: paying attention to every bridge, listening & smelling, thinking about the vistas and how to describe them. It makes me wonder how often I'm really paying attention when I'm on the bike, and I don't just mean paying attention to the trail, but to everything that surrounds it.

Another reason to slow down and take it all in.
Posted by bikegirl at 5:28 PM