It was on the list: find & hike through the second tunnel to find the 'Shangri-La' that was listed in the guide book. We tried the Tunnel Hike three years ago. Twice. The 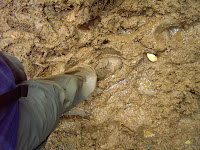 first time, we did lots of route-figuring through the boot-sucking mud, then missed a turn that the authors failed to mention. By the time we'd found the entrance to the first tunnel, we had to turn around.

A week later, we were back, starting a little earlier on a clear day when the rest of the island was on the beach - except the other two hikers we met who were, surprise, also from Alaska. The mud again spilled over our boot tops, but the route, including where not to take wrong turns, was fresh in our minds. Upon reaching the first tunnel, we pulled out a headlamp and flashlight, then stepped inside. We waded through mid-calf-deep water for a mile to reach the other side, then climbed over a dike to reach the Wailua River where large boulders filled the riverbed. We heard voices and that's when we met the other Alaskans who were having lunch among the boulders. We chose places to sit and eat, strategizing our next move.

Jon wanted to find the entrance to the second tunnel so he headed upstream, then around a bend. A while later he returned. He was soaked to his chest after having sunk into a big pool. We were, again, running short on time. Another time; another time, was what we told ourselves. We will find and get through the second tunnel. The authors said it was worth it. The waterfall; the view. But their route description included the phrase: "If you find it." It didn't exactly inspire confidence in their not-so-detailed directions. (As a guidebook author, I was glad to see that the 2009 edition of the book improves the directions, but they could use a more detailed map.)

Just before we left Anchorage on this trip, we did more research and planned what to wear to make the hiking easier. 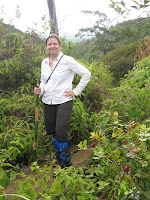 My solution was to bring gaitors to keep the mud from filling my boots. A long-sleeve shirt for the thorny ferns that surround parts of the route and dig into our skin. Headlamps with fresh batteries. We also did a web search and found some more-detailed descriptions that included photos of the route. Once in Kaua'i, we spent a few days hiking to get our legs ready for the challenge (among all the other activities), then we set the alarm to wake us before 6 a.m. on Sunday.

Gaitors, long sleeves... just what everyone
wears on a tropical hike, right?


We started hiking just before 8:30 (this fact alone should tell people who know us how determined we were) and were immediately surprised that there was no mud. None of the glopping, slippery eight-inch-deep mud holes that mark the route. Instead, the soil was crumbly-dry. Entirely unexpected, especially since the mountain looming above us is said to be the rainiest spot on the planet, reportedly receiving on average 460 inches of rain a year! We were feeling pretty lucky. 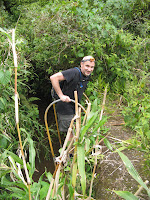 The drier trails made for faster hiking, and we made it through the first tunnel well before noon. After lunch in the boulder-filled Wailua river, we checked our directions again and headed upstream. A few false trails took us a bit too far from the route, but another check and trying to remember what I'd read on the web and we reached a dam. From there, we found a clear trail that led to a ditch and the second tunnel. Finally, we were closer to our goal. 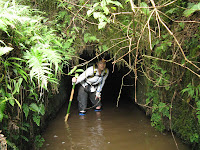 The water was deeper here, sometimes half-way up my thighs, but there was no stopping us. After wading the 7/10 of a mile through this tunnel, bent over sometimes as low as a speedskater, we had to scramble up an incline where water was flowing down into the tunnel from near the entrance. Stepping into the light, we were at the head of a valley. A waterfall flowed from a gorge high above, sending spray raining around us. More water drizzled from the rim of the cliffs which formed a semicircle above our heads. 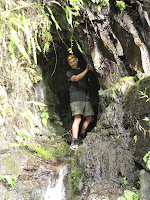 Jon at the bonus tunnel.

We'd made it, and with plenty of time to hang out or explore the canyon. After we climbed up to a pool below the waterfall, Jon spotted what looked like a cave on the opposite side of the river. He grabbed his light to check it out. After he disappeared into the opening, I hiked to my pack and got my headlamp and camera so I could join him. It was a third tunnel, mentioned on the web site. 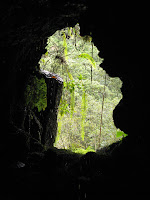 Rockier footing and smaller, it had openings where we could look out over the Ka’apoko Stream that feeds into the Hanalei River. We couldn't go far before rockslides turned us back, but this bonus tunnel was quite a reward after all the hiking and planning, even the hiking we did in 2007.

After hiking this trail three years ago, I sometimes wondered if I would ever get back to finish the hike. If I would have the fortitude to complete it, especially because it's one of those hikes that is almost as challenging mentally as it is physically. I guess I wanted the reward enough. And I think for the first time I understand why people keep trying for a particular summit. They get so close and they know that there are other summits, but none will be as satisfying as the one that has turned them away. When we reached the end of Tunnel 2 with its waterfalls and bonus tunnel, we had our summit. There are other waterfalls, but none as rewarding as this one. 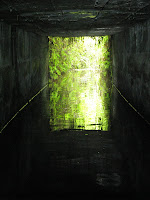 Looking out from entrance of Bonus tunnel.
Our Shangri-La

Just a note: According to The Ultimate Kauai Guidebook, the tunnels were built in the 1920s by a sugar company to divert water from the Hanalei River to the Wailua River. They aren't maintained, and neither is the trail.

There is nothing quite like hearing a sunrise from the summit of a peak that has conquered you.