snow time, the highs and lows 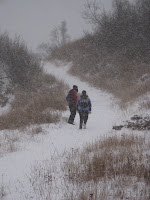 Gloria & Bev in the middle of the storm.
Last week Jon brought my winter bikes home. They've been stored at the shop warehouse for the past two months because we just didn't have the space here during the remodel. Since we're not quite ready for all the bikes to be home right now, I had him take a few back to work until the garage is finished on the inside. But I forget how many parts must be swapped on my bikes. Pedals, a saddle and seatpost for one bike, a saddle for the other. Transfer the frame pump. Seat bags. The left grip of my mountain bike had to be moved onto my snow bike (long story).

I was making the change-outs and Jon was transferring pedals for me when the wind picked up and the temperature spiked outdoors: our mid-twenty-degree day had just jumped to 39 in under 20 minutes! Not unusual when the Chinook winds kick in bringing warm, wet air to Anchorage. I was meeting friends for a hike and since we'd seen the weather trend, we decided to not hike too high; we'd stay in the trees.

It was a good call because even in low areas the wind was blowing snow sideways and during parts of the hike the sharp icy barbs hit our faces like a sandblaster. Ours were some of the few tracks out there and on our return trip even those had been buried in exposed areas, replaced with newly-formed crust. Sometimes we would duck between some trees only to have the wind shift and swirl and still manage to hit us. We saw one person with a dog in the first hour of the hike. When we reached a main trail, we did see more people, all of them, like us, happy to be out in the snow despite the high winds pushing through the trees and golden-brown grass.

It was a good day to be in the woods. When the wind drowns the sound of your footsteps against the crust of snow. When the ice is just forming on the creeks in layers of overflow that look like the edges of mineral pools. When the ground has frozen the small boggy spots. When the ravens are playing on the currents above the Campbell Creek Gorge, their calls covered by the powerful wind and the sound of snow hitting our jackets and hats. And then, it changes. 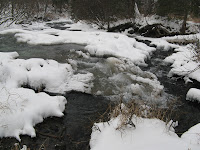 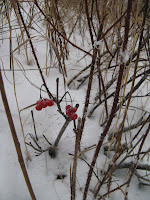 Just a few days later, it was single-digits when I went skiing with two other friends. I was still looking for things in the house. The neck gaitor, wind-block mittens, classic ski poles. I was still trying to remember how to dress when it's 5 above and dropping. 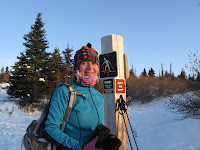 I don't know how cold it is.
The trails were well-packed and our skis and poles creaked against the crusted snow. I balled my cold fingers inside my gloves before pulling the heavier mitts from my backpack. I remembered how to ski down a narrow singletrack. Breath froze on strands of hair that had escaped my hood and cap. My upper lip felt frozen. Crusty, frosted snow is slow; good for a first ski of the season, but a thought kept crossing my mind, enough that I mentioned it a few times to my friend, Jo-Ann: This would be great on the snow bike. 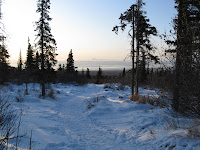 Returning to the trailhead with a view of the inlet.
Of course, I create far more wind chill while biking than I could possibly generate the way I ski, making 5 degrees on a bike feel much colder than on skis. It's hard to keep my face warm enough without my glasses frosting over. Even with contacts I need to wear some kind of eye covering to block the cold and wind from my eyes. But each year, I figure something out to allow me to ride on colder days and stay warm. I sometimes forget how long I was off the bike last winter and how much I missed the snow riding as I recovered from some injuries.

Now that Jon has found my insulated cycling shoes, maybe it's time to gather everything else together. The more I think about it, the more I know I have to start getting out into the chill of winter on the bike. Because the longer I hide, the harder it will be to finally venture out, but once I venture out, I'll remember just how wonderful it is. However, I'm going to wait until it gets above zero.
Posted by bikegirl at 10:30 AM

Sounds like a good time skiing! Did you know that the weight of the Ski Pole makes a really big difference? See more at http://www.sightseeingreview.com/lightestskipoles.php

I was feeling bum about my limited cycling with the onslought of winter until I went xc skiing around Westchester on the new trail. The West high CC running coach built it with his crew, down through the woods, on the South side of the lagoon, just down the hill, and through the beaver cut downed trees. Great fun and I felt a lot better about not having as much time on my trusty steed. I do have my studded tires on and have done a few bike rides at below zero or close to it. My neighbors and I are going to ski it again this afternoon!

Hey Jim -
good of you to stop by.
Next time I need a west-side skiing fix I'll check it out. Part of me wants it to warm up, another part tells me the ice could get really awesome on the inlet if it stays cold... either way, I'll take it.