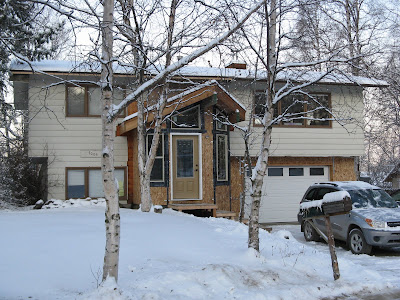 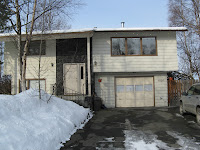 In March, before all this started.

It may not have seemed like good timing when we started, but a three-ring binder of notes, inspection reports and invoices attests to the progress we've made since just over two months ago, when, on September 2, I wrote on the first page: "Gave go-ahead to Wes." Wes is our general contractor. He builds fancy homes in new subdivisions. Houses you might tour in the annual Anchorage Parade of Homes. But he also orchestrates remodels. And when I say orchestrate, I mean that after living through the sequence of events that culminated in our windows and doors being installed last Friday, it reminded me of an orchestra conductor. In very slow motion.

Cue the excavator, framers, concrete cutters and pourers. Electricians, plumbers, roofers. Inspectors. How many people made their way to our house to help make the transformation? Everything must work in sequence. People must know their parts and be skilled at them. A half-day delay for a delivery or an inspection might mean no more work that day. No moving forward.

Over the peaceful quiet on those days, I could hear my own thoughts as I looked at the calendar; avoided watching weather forecasts. Many days I would repeat the phrase: it is what it is. No need to worry about what I can't control. Other days, when it was raining, I'd say to the crew, "at least it isn't snow." This must have been somewhat annoying, I realized, when the most sarcastic guy on the crew responded that I'd make a good supervisor. I was trying to stay optimistic for me more than for them.

Sometimes I'd wonder at the wisdom of beginning the project that, by Wes's schedule, would wind down at the end of October. Often Jon and I try to be away from Alaska in October. It's an unpredictable month (come to think of it, which month isn't?) It can be rainy, or it can be snowing. It can be in the single-digit temperatures. It can be icy. Windy. Gloomy.

But this year was different. Despite a late-September snowstorm that dropped wet snow across the lower Hillside area of Anchorage, the snow stayed away from most of the city. Until Sunday afternoon.

Now Jon and I are repeating a phrase that was becoming common at the house: we are so lucky. How did we get so lucky? When we started, it seemed our timing was all off. We were cutting too close, starting too late in the season. Then things began coming together: A corner of the house was being jacked up so the floors would be more level. Then things began falling apart: That gap under the garage door used to be a concrete block. We would need more foundation work. More excavating! 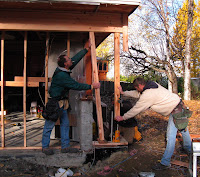 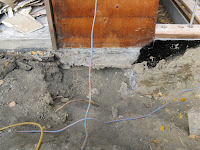 There used to be a concrete block there, right? 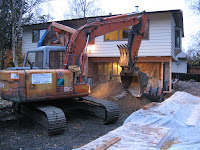 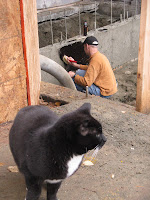 Kitty makes a rare appearance at the jobsite
as Jon seals part of the foundation.

Any remodel will bring surprises. If you think about it, every day will bring surprises if we open our eyes to them. But a week’s setback and a little more added to the bill were not welcome surprises. The days got shorter as the month of October wore along. We were patient and did what we could to keep things organized. Do some of the work ourselves where we could. We watched the progress, even when it seemed very slow. 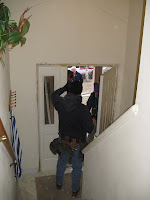 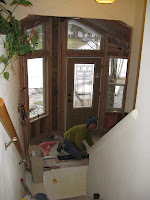 Waking Monday morning to around four inches of fresh snow on the ground, Jon and I again commented to each other about the luck of the timing. The luck that the roof was on before the rain came a few weeks ago. That the ground froze two days after the electric line (for which we had hand dug a 15 foot long trench, 30 inches deep) was buried and the day after the last concrete was poured. That last Tuesday we were able to spread a load of gravel on the driveway and get it compacted. 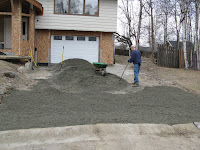 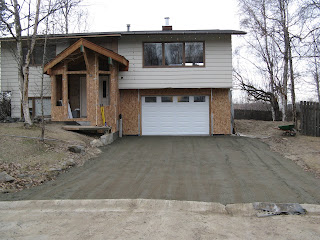 15 tons of gravel to level the driveway.

Who can explain luck? By our timing and our gut decision to go with the contractor who said he could have it done this fall, we sometimes wondered if we had made the wrong choice by starting so late. But as each day brought us closer to finishing this phase of our project, we kept the fingers crossed, thought about all the sunny days we had worked indoors, maybe having banked those days to have good weather this fall.

What started with a deck demolition on Labor Day ended last Friday, almost two months later with the window and door installations. Now, of course, our work continues: insulating, inspections, electrical and plumbing work. More inspections. Again, this was only phase 1. There’s lots still to do. But progress itself is something to be celebrated. We mark the milestones, then get back to work. So much to do.
Posted by bikegirl at 10:26 PM

Email ThisBlogThis!Share to TwitterShare to FacebookShare to Pinterest
Labels: remodel