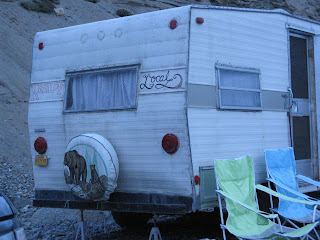 I told someone I felt more Alaskan after the fishing trip I took with Jon and our friends last week. I've been fishing before, but unlike anyone I know who's gone salmon fishing here, I've never had one on the line. Not one. I'd go with Jon. Cast and reel, cast and reel. Watching as he'd haul in another and add it to the stringer in the river. Soon I'd retreat to the bank or the tent with a book and fall asleep as he fished until it was too dark to see the water or he had his limit. That lasted a couple of seasons before I stopped going.

For the last two years Jon's gone fishing with friends during the personal use fishery at Kasilof on the shore of Cook Inlet. He doesn't call it fishing; he calls it harvesting. (For each family, the head of household can get 25 fish, then 10 more for each additional person in that household.) Rather than standing on the river bank casting a line, people set out nets, either attached to something on shore, or anchored just off shore. The net is dropped, with the heavy lead line sinking while the lighter buoy line floats. The net is strung between them, floating vertically in the silty water as the salmon head up the inlet for the mouth of the Kasilof River. 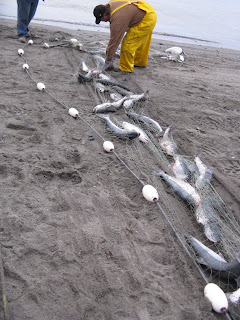 Our beach neighbors with their haul of salmon.
Our nets are dropped off shore from a small boat. After a few hours waiting and watching from shore, a group goes out to check the net and pick out the fish. I volunteered to pick the net, not knowing how much work it would be but excited to experience the process. I'd already seen fish hauled ashore by other set-netters the night before and wanted to see what our nets had captured. 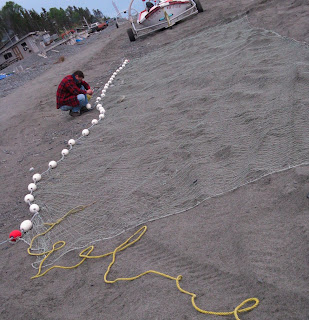 John readying one of the nets. 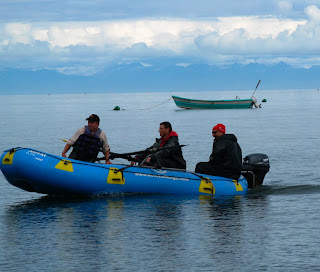 Randy, John & Art return from setting nets.
I went out with Jon and our friend John who was at the motor and oars as Jon & I picked. When I hauled the first fish over the bow, Jon said you have to kiss the first fish you bring in. I could have argued and said that was just crazy. On the other hand, what harm would it be to kiss the first fish and thank it for swimming into our net to become dinner? So I pulled the slippery, silver fish to my lips, gave it a kiss and put it in the basket. I know it's not an official tradition, but I don't think it's such a bad idea. Besides, after 15 years here, this was the first fish I had ever pulled out of the water. Finally I had my fish! But there were lots more to haul in. 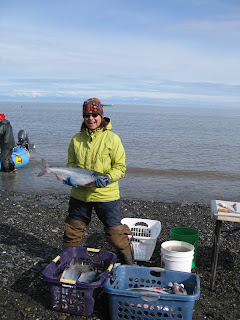 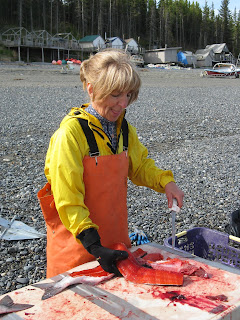 Lynn at the filet table.
We camped for two nights above the high tide line in the days leading up to the summer solstice. We walked along the rocky beach, stayed up late and got up early (before 6am). It was the first camping trip of the year and as always, it felt good to be back in the tent, even when I was lying awake listening to rain on the fly. We were among dozens of other families who were doing the same thing we were: getting our catch of fish to fill the freezer or pantry so that we could do all the other things we want to do to fill our long summer days. 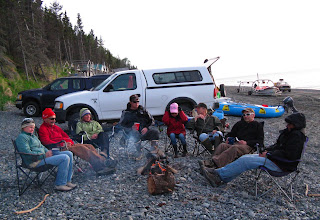 Around the fire after a full day -
Judy, Art, Lynn, Dave, Nicole, Randy, Jon & John.
After spending Saturday and Sunday evenings at home processing: Jon cleans and chops the salmon into chunks; I wrap and vacuum seal; label and freeze them, we're ready to get back to the other outdoor activities we love. And this winter we'll appreciate that we took a few days to fill the freezer. 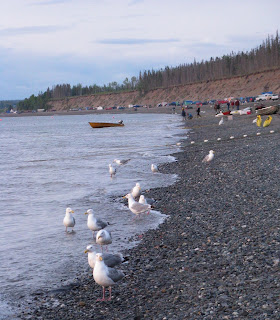 The gulls dine on the scraps. 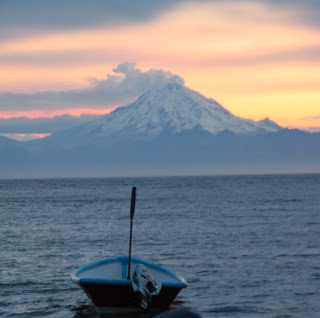 Mt. Redoubt, still steaming across the inlet.
Posted by bikegirl at 11:15 PM