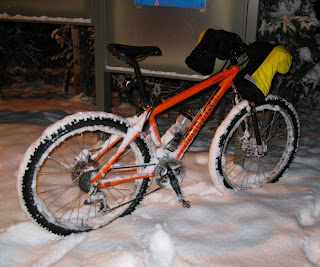 this deep and then some all the way home!
Thursday evening was no 350-mile ride to McGrath, but as I steered my bike onto Huffman road, the wind blew needles of icy snow into my face. Hard to see; hard to keep moving in a straight line, I thought about turning around and calling for a rescue ride home. No, I told myself. Just get up the hill to Gregory Street, off the main road before making that decision.

I thought about the people out on the Iditarod trail, trudging, pedaling and skiing through worse conditions. Then I did what I don't often do: I got off the road and pushed my bike along the path which had begun to drift over. When I had called home earlier in the evening, Jon said there was no wind at our house on the east side, but the flags across the street at the Post Office told another story. Now I was feeling the storm's power as I turned my head to my left shoulder to keep the stinging snow out of my face.

Each phase of the nine-mile commute had its own character: busy neighborhood streets were packed down and easy to ride; quieter streets, a little sketchy. The paths on Lake Otis and Elmore had about three inches of fresh snow and drifts on the edges but were entirely rideable because of how well they've been maintained all winter. In the park, my SnowCats and 2.3 studs nestled into fresh Endomorph tracks as I pedaled up the Moose Track Trail.

Happiness comes in simple ways on this kind of commute: when it wasn't a crosswind, it was a tailwind; the light at Tudor Road turned green just for me; and despite all the snow piled above my bottom bracket, I was able to shift into my granny gear for the final climb to our house where Jon and Kitty greeted me. 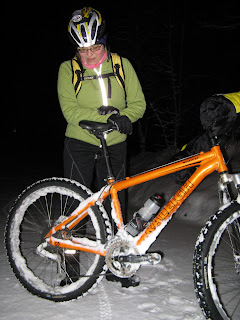 thank you, granny gear, for working when I needed you...
- at home in the driveway
I doubt you'll find my name on a race roster for a winter event like the Ultrasport or even the Susitna 100. But the racers who challenge themselves gave me inspiration to ride in blustery conditions and to get off and walk when I had to. Thanks.
Posted by bikegirl at 10:48 AM